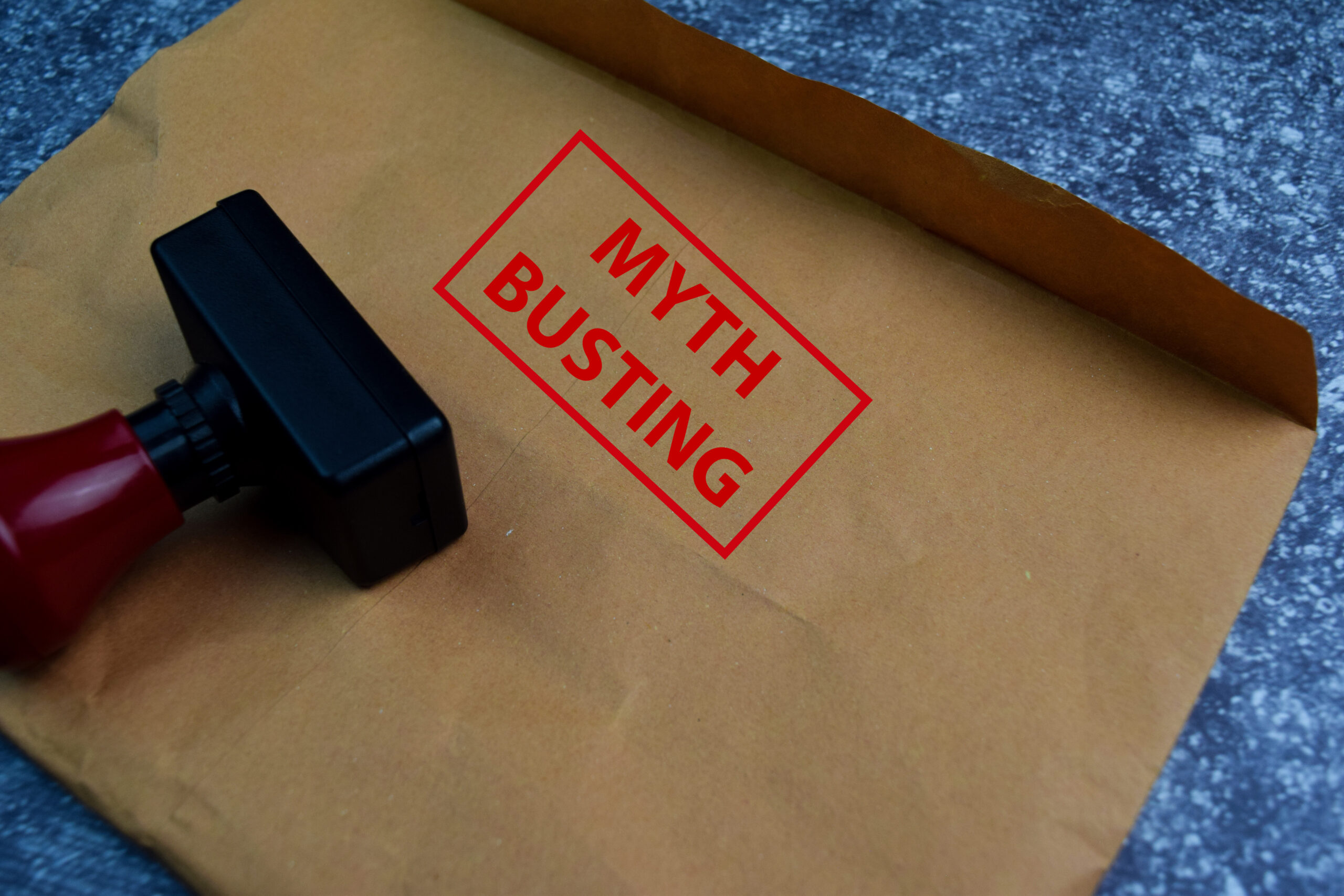 What’s holding you back from moving into leadership? If you’re still operating outdated and inaccurate ideas about what makes a leader and who can take on the role, then it’s critical you challenge what you think you know for the benefit of your future career. We look at seven myths about leadership that may be holding you back and why you should change the conversation you’re having with yourself, and move forward with confidence…

Think again: Only 10 percent of people are ‘natural’ leaders

What is a ‘natural leader’? — research from analytics firm Gallup suggests it’s a unique combination of talents including the abilities to motivate, drive outcomes and build trust in relationships. But — and it’s a big ‘but’ — the study also found that only 10 percent of people possess these naturally. The idea that leadership must be innate is one of the biggest blockers to seeing ourselves in leadership positions as women, particularly if we’re prone to imposter syndrome. Popularised by the work of psychologist Raymond B. Cattell in 1954, the idea that personality traits can be reliably used to explain and predict people’s behaviour is a bias that’s been widely internalised. But modern thinkers now define leadership as a behaviour — not just an outcrop of certain traits. Stephen R. Covey, author of The Seven Habits of Highly Effective People insists, ‘Leadership as an innate or learned quality is a false dichotomy – leadership is a choice.’ In this regard, we can all make decisions to work on building the skills needed through careers, experience, CPD and mentoring to allow us to be the leaders we want to be.

Myth: ‘I need to be an extrovert’

What do Marissa Mayer, Oprah Winfrey, Bill Gates and Barack Obama have in common? All of them are self-confessed introverts, the psychological profile that favours internal focus over external stimulation. An estimated 40 percent of executives consider themselves in this bracket according to Jennifer B. Kahnweiler, author of The Introverted Leader. When you consider that 75% of the world’s population is extroverted (as Marti Olsen Laney notes in the The Introvert Advantage), that’s an impressive showing of leadership among the population. It puts pay to the idea that being outward facing and highly social is the only way to succeed in a leadership position. Introverts have been shown to have many strategic business advantages, including greater critical thinking, enhanced listening skills and the ability to process information deeply — and they may even be more naturally suited to the strategic, future-focused decisions that modern leadership requires. Harvard psychologist Randy Buckner has revealed that introverts consistently show a thicker concentration of grey matter than extroverts in the prefrontal cortex, the part of the brain which controls decision-making and abstract thought.

Research shows that girls are still not primed to take up leadership positions as much as their male counterparts are from a young age, and as a result can often have fewer direct experiences of leadership early on. This can lead to them internalising a belief that a lack of ‘direct’ leadership experiences makes them less eligible to be leaders later. However, while we associate leadership with positions at the apex of a company, position alone does not make a leader — it’s the enactment of leadership skills that earmarks people for career progression. So, don’t worry about your ‘lack of experience’ or wait to be promoted to ‘be a leader’ — start where you are. Begin to develop your leadership presence and abilities to influence those around you and look at theories of lateral leadership, or the art of leading without formal authority. Inventory your experience and achievements for the leadership competencies you have to start to recognise yourself as a leader — and develop your leadership skills such as communication, listening and negotiation in your role. As management professor and leadership thinker, Peter F. Drucker argued, ‘A leader is anyone who is responsible for actions and decisions that contribute to the performance capacity of his or her organisation’.

Myth: Leaders have to be bulletproof

As one of the foremost modern thinkers around vulnerability, Brené Brown has been vocal in her belief that vulnerability is now one of the must-have strengths for a leader to succeed in today’s business world. And it’s a view that’s now widely shared, speaking to a need for authenticity and trustworthiness in modern leadership, as well as a premium that is now increasingly being put on the business benefit of leadership with emotional intelligence. Allowing yourself to be open and honest enables others to do the same, and is a powerful leadership strategy — while servant leadership, for example, in which the goal of the leader is to serve, characterised by authenticity and values-based leadership, has been shown to yield more positive and constructive behaviour in employees as well as improving performance. Even neuroscientific research confirms this — employees who recall a boss who resonated with them showed enhanced activation in parts of the brain related to positive emotion and social connection, while the reverse was true when they thought of a boss who did not resonate.

Think again: Owning your mistakes is a hallmark of great leadership

‘As any great leader will tell you, they have made many mistakes along the way. They will admit that it was the collective insight from bad decisions that taught them invaluable lessons – and how to see opportunities in everything and anticipate the unexpected more quickly,’ writes Forbes Leadership Strategy Contributor, Glenn Lopis. In a study by Dale Carnegie Training, 81 percent of employees considered it important for leaders to admit mistakes, but only 41 percent felt their bosses consistently did so. Researchers also found that a leader’s willingness to ‘admit when they are wrong’ is immensely powerful in its positive impact on employee job satisfaction and talent retention. Says Lopis, ‘Successful leaders are transparent enough with themselves and others to admit their wrongdoings so that those around them can also benefit from their learnings. They call this wisdom, and many leaders lack it – because they are too proud to recognise mistakes as valuable learning moments for themselves and others.’

Myth: ‘It will destroy my work-life balance’

Stepping into leadership should be about working smarter, not harder, delegating more, and powering up your team so you have the support that will allow you to perform your new role. For many women, the perceived step up in time, workload and responsibility is a major consideration in a move to leadership and can hold them back out of a concern around being overwhelmed or disrupting the equilibrium that allows them to meet the demands of work and home. Changing your perceptions around what leadership means is crucial to negotiate a new leadership landscape successfully and keep the work-life balance priorities that are important to you. ‘Part of being a leader is leading yourself and actually, great leadership comes from people who have good boundaries and are assertive and clear about their needs and communicate them clearly to the people around them,’ says impact specialist and everywoman trainer Jodi Goldman. You should be developing the people around you in your team to take on more responsibilities so that you can step away and do more strategic, big thinking as well, because that’s how it should be when we’re stepping up into leadership positions. Ask yourself how you are going to up-level not just your job but the support system around you at the same time.’

Myth: ‘I need to be liked to lead’

The ‘likeability trap’ can keep women from pushing forward and meeting their potential, especially when unconscious bias often still frames women who demonstrate authoritative behaviour as bossy or controlling. ‘The problem for women is that being direct and authoritative goes against cultural beliefs about what women should be like,” says sociologist Marianne Cooper. ‘Women are expected to be friendly, warm and modest. So when they exercise power, they violate societal expectations about how they should behave and people — both men and women — often react negatively. Navigating both a need to be liked and display true leadership presence can cause tension when considering a step up. Being liked is not a problem though for a leader in and of itself, in fact research shows that well-liked leaders are seen as trustworthy and emotionally intelligent. The problem lies in the need to be liked. To short circuit your need to be liked, you need to know your values and principles. When you attach your identity to being liked at all costs, you prioritise meeting everyone else’s expectations. Instead, navigate decisions and tough conversations of leadership from a place of ‘why’ and use them as an opportunity to gain respect with a decision based on core values as part of your transition.

SIGN UP
PrevPreviousQuiz: Victim, Persecutor or Rescuer — which role do you play in drama?
We use cookies on our website to give you the most relevant experience by remembering your preferences and repeat visits. By clicking “Accept All”, you consent to the use of ALL the cookies. However, you may visit "Cookie Settings" to provide a controlled consent.
Cookie SettingsAccept All
Manage consent