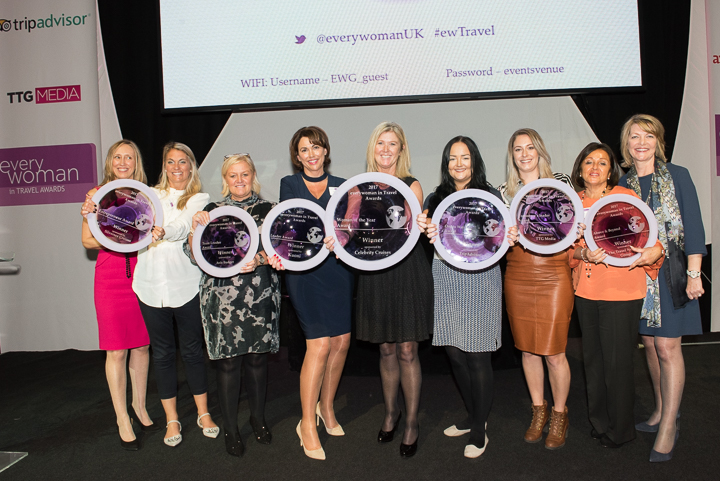 Nominations for the 2018 IBM iX everywoman in Travel Awards have now closed.

With new categories introduced for 2018, this year’s awards will also recognise the achievements of men who are advancing the progress of women working in the sector along with women inspiring their communities outside the UK.

Within the travel and hospitality sector, employment opportunities have been increasing at almost double the rate of the rest of the UK labour market since 2009 and it is now the UK’s third largest employer, accounting for 9.5% of total employment*. However, despite women accounting for 67% of all new travel employees, there is significant under-representation in senior positions. Women currently hold less than 40% of all managerial positions, less than 20% of general management roles, and represent only 15.8% of all board positions.***

With the continuing uncertainty around Brexit and technology challenging and changing consumer purchasing habits, the UK’s travel businesses need to attract, inspire and retain the best possible talent, supporting them on a career journey that allows for all life stages.  This includes attracting a gender-balanced workforce with a range of skills from coding and customer service to HR and finance in order to future-proof their success.

The 2018 IBM iX everywoman in Travel Awards will celebrate the women excelling at all stages of their career journey, creating role models that will inspire future female talent. From apprentice or graduate, leader or entrepreneur, rising star or executive, the awards will showcase the breadth of opportunities offered by a career in travel as well as the innovation and achievements that women in the industry are demonstrating every day.

The 2018 IBM iX everywoman in Travel Awards categories are as follows:

*New for 2018* International Inspiration, sponsored by Gold Medal & Travel 2 – Awarded to a woman working outside the UK & Ireland that is a role model for women in her community.

*New for 2018* Male Agent of Change – Awarded to a man for his active commitment to advancing the progress of women working in travel.

One to Watch – Awarded to a young game-changer under the age of 21 in education or apprenticeship who demonstrates a passion for the travel industry.

Tomorrow’s Leader, sponsored by TTG Media – Awarded to a woman under 30 making a significant contribution to the sector.

Entrepreneur, sponsored by Celebrity Cruises – Awarded to an owner/operator of a travel business that has been operating for three years or more whose vision will inspire other women to start their own enterprise.

Above & Beyond – Awarded to a woman at any stage of her career that has truly gone above and beyond her role to help drive the organisation’s success.

Team Leader – Awarded to a woman whose team leadership has greatly contributed to the organisation’s success.

*New for 2018 * Executive Leader – Awarded to a woman making a significant direct financial contribution to the commercial success of the business.

*New for 2018* Leader of Change – Awarded to a woman who is making a significant contribution towards the strategic direction of the business through best practices, employee engagement, improved productivity and innovation.

“We launched the everywoman in Travel Awards in 2017 to recognise the best female talent in the industry. This year, we also wanted to celebrate the work that many men are doing to encourage more gender-balanced work forces at a senior level, which is why we have introduced the Male Agent of Change Award. The purpose of these awards is to recognise those whose contribution will ensure the future success of the travel industry and that women are able to participate fully and be recognised regardless of seniority or circumstance.”

The winners will be announced at an awards ceremony at the East Wintergarden, London on 14 November 2018.

** Women in Tourism & Hospitality: Unlocking the Potential in the Talent Pool, Diageo, 2015

***THE STATUS OF WOMEN IN THE UK TRAVEL & TOURISM INDUSTRY: An evaluation of the cruise and tour operator sectors

SIGN UP
PrevPreviousGain the upper hand on stress
NextThe Origins of Happiness: the Science of Well-Being over the Life CourseNext
We use cookies on our website to give you the most relevant experience by remembering your preferences and repeat visits. By clicking “Accept All”, you consent to the use of ALL the cookies. However, you may visit "Cookie Settings" to provide a controlled consent.
Cookie SettingsAccept All
Manage consent