How four women figured out their next career move 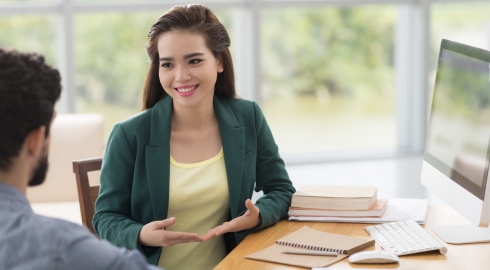 As you approach a workplace appraisal, don’t fall into the trap of only focussing on what you’ve achieved over the last six months and how you’d like to be rewarded for a job well done.

Make sure you put as much time and thought into considering your next move and what’s currently preventing your transition. Remember: bosses aren’t responsible for your career progression; you are.

Join us as we look at how four women responded to the feedback: “Figure out your next move.” Whether you’re responding to a boss’s critique or trying to answer your own workplace conundrums, you’ll find more inspiration in our workbooks Career planning and Preparing for a successful appraisal.

Prototype all your options in a ‘non-commitment’ way

“I [began] what I call a “self-education program” on something they don’t teach you in school, but is arguably the most important thing of all: what I wanted to do with my life.

I began cold emailing anyone I could think of who I was interested in meeting and learning from. To my surprise, I had a shockingly high response rate. I got to meet with [business] founders, and also various investors and professors. I asked them about their career path, how they’d come to where they were now, and what recommendations they had for figuring out my next move.

I didn’t stop there. I also volunteered at major conferences, so I could meet more people and attend the talks for free. I checked out various events and talks in the region, and even sat in on classes at Stanford (which the professors were kind enough to let me observe). [One tutor] advocated an idea that stuck with me: testing out the different career experiences I was interested in, in the most low commitment way that I could for each option.

So… I began “prototyping” the different work experiences that I was considering — dipping my toe in each — so I could figure out which I liked best. Again using my favorite tactic of cold emailing, I reached out to and secured “shadow experiences”.

Looking back, I’m so happy that I took the time to prototype my different career options — and am grateful for the fact that it was nearly free to do so (much cheaper than say, an MBA, which many people say they take to figure out what to do with their lives). I learned more in those few months than I had in years.”

Don’t wait until you’re asked: tell your boss what you want and seek their help

“For some reason I had it in my head that it was poor etiquette to tell your boss that you want their job. I think I was worried I’d come across as aggressive or threatening. But it was the only honest answer so I said as much when I was asked about my ideal next step, and couldn’t believe it when he replied: “Well I’ve got news for you; I’m leaving.” He was honest and said that while he’d support my application for his job, I’d have a tough time convincing his bosses.

They didn’t really see me or have any inkling of my ambition. In the short amount of time I had to prove myself, I’d need to step up. I will always be grateful for my boss’s advice: “Behave like you’re already in the job you really want; the best way to convince people you can do it is make it easy for them to imagine.”

Tap into a more diverse network

“Your core network are usually your most useful allies and supporters, but being surrounded by the same faces can keep you stuck in the same thinking, particularly if what you’re looking for is a fresh dose of inspiration. Attend a group event or networking function that sits outside your usual area and see what happens when you’re confronted with individuals from other walks of life. The act of having to introduce yourself afresh might put you in touch with what you really value in your career and how you want to be seen by others, helping to answer that big question: “What’s my next move?”

“It took longer than expected for me graduate due to stops and starts at university, and in my early twenties I struggled with not knowing what or who I wanted to be. I desperately wanted to have a voice, but I lacked confidence and thought I needed to be an expert at something before I could speak up. My confidence grew when I stumbled into a group of people who were interested in helping others communicate. Through my work with them, I developed my passion, and passion is what you need in order to have a voice. Confidence is still a work in progress for me, and what I’ve realised through coaching world class leaders is that everyone is in the same boat. No matter how someone comes across on a stage, they’ll have something going on in the background.”

Instead of waiting for the perfect opportunity, design your own

“I purposely took a role at a PR agency because it was hugely varied. I didn’t know exactly what I wanted to do so it seemed like a good way to test the waters. When, after 18 months, my boss asked me where I saw myself headed, it sent me into a bit of a panic. She seemed to be suggesting that I’d only progress if I specialised, and it was true that the promotional opportunities on the horizon would mean choosing between different facets of my job and having to let go of others.

I put a lot of pressure on myself to choose a particular work stream; I made endless lists of the pros and cons of following this path over another, but what I kept coming back to was that I liked variety. Eventually it dawned on me that this and this alone was what I wanted in my next role, and that to sideline myself into any speciality wasn’t going to make me happy.

I plucked up the courage to tell my boss, expecting her to tell me that I was more or less committing career suicide. Instead she responded: “So figure out how that’s going to work for me and you: Design the job I need filling and you want to do.” So that’s what I did, and a little while down the line I find myself managing a small team, each member specialising in the components that used to make up my old job. My boss has a great all-rounder in a position of responsibility; I have the variety I need in the role but the step up I wanted.”

More on giving and receiving feedback

The psychology of dealing with criticism

The secrets to getting career-enhancing feedback

SIGN UP
PrevPreviousMindfulness: take your beginner’s practice to the next level
Next2016 FDM everywoman in Technology Awards: finalists announcedNext
We use cookies on our website to give you the most relevant experience by remembering your preferences and repeat visits. By clicking “Accept All”, you consent to the use of ALL the cookies. However, you may visit "Cookie Settings" to provide a controlled consent.
Cookie SettingsAccept All
Manage consent