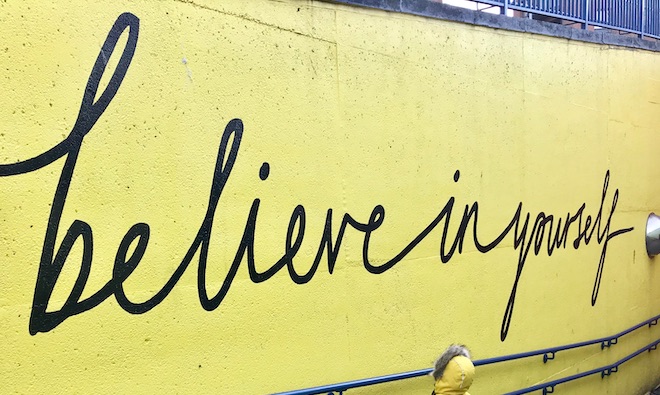 Do you ever feel like you’re ‘winging it’ at work? Like you’re not quite qualified enough for the role you’ve found yourself in, and that soon – somebody’s going to realise?

Sounds like you’ve got ‘imposter syndrome’, described as ‘a psychological pattern in which an individual doubts their accomplishments and has a persistent internalised fear of being exposed as a “fraud”.’

And you’re not alone. According to a survey by TRESemmé – 90% of British women experience it, while even Michelle Obama admits she does too, finding herself questioning why people should ‘take her seriously’.

The good news is that this is something you can overcome, with the right techniques. So we spoke to the expert – NLP practitioner, coach and founder of lovepublicspeaking.org, Carrie Swift – to discover her top tips on giving imposter syndrome the slip.

1. Take control of your self-talk

Are you telling yourself a story such as, ‘I’m not experienced enough to be doing this job or I’m too young/old/shy’?

If so, you need to intervene with these negative thinking patterns, as they become self-perpetuating and take on a life of their own. Cognitive behavioural therapy works on this basis and there are various CBT apps you may find helpful, such as Catch It.

Positive mantras and affirmations are also very effective. For instance, before heading into a big negotiation meeting, I listen to a song by Ed Sheeran called, ‘You need me, man, I don’t need you.’ It says that line repeatedly and really changes my mood.

2. Shun perfectionism in favour of self-acceptance

It’s important to develop what’s called a ‘growth mindset’, which is to take the approach that there’s no such thing as failure, only feedback and that if things don’t go to plan it’s ok because you value the learning process, not just the outcome.

If you achieve this kind of mindset, it can really help you feel more relaxed about how you ‘perform’ at work and go some way to beating imposter syndrome.

Regularly challenge yourself to do something that scares you. For instance – ‘This quarter I’m going to do a farewell speech, next quarter – I’ll ask for a pay rise.’ By doing this, not only are you continually growing, but you end up surprising yourself with your own capabilities and thereby boost your self-confidence.

There’s a great TED talk by Amy Cuddy, in which she describes an experiment that shows just how much our body language impacts our mood. In it, a group of people did a ‘high-power pose’ before an interview (such as standing up straight with hands on hips), and a second group did a ‘low power pose’ (sat slouched over with arms folded). Those in the first group performed much better in the interview, and swab tests showed that the pose had increased their testosterone levels (the hormone that helps you feel assertive and confident) and lowered their cortisol levels (the ‘stress’ hormone).

So before a big presentation or event, nip off somewhere quiet and do a high power pose for two minutes. In meetings, make sure you’re a least sitting up straight with legs uncrossed.

Physically seeing your achievements written down can really help with imposter syndrome. When I first started my business, progress felt really slow, so I created a ‘progress tree’ on my wall – sticking up a post-it note every time something successful happened.

Another thing I’d recommend is journaling; looking back and seeing that just a few months ago you were dealing with totally different things is a powerful way of reminding yourself just how far you’ve come.

Sometimes there aren’t any shortcuts to feeling more comfortable in your role. But if you ‘fake’ the confidence initially, and see and hear yourself coping, eventually that does turn into real confidence.

One final point to remember is that as uncomfortable as imposter syndrome may make you feel, it’s not necessarily a bad thing to experience, as it means you’re pushing yourself to your full capacity and grasping those opportunities to climb the ladder.

SIGN UP
PrevPreviousHUMANS OF EXPERIAN – CELEBRANDO AS HISTÓRIAS QUE FAZEM DE NÓS O QUE REALMENTE SOMOS
Next5 ways to create a successful women’s networkNext
We use cookies on our website to give you the most relevant experience by remembering your preferences and repeat visits. By clicking “Accept All”, you consent to the use of ALL the cookies. However, you may visit "Cookie Settings" to provide a controlled consent.
Cookie SettingsAccept All
Manage consent