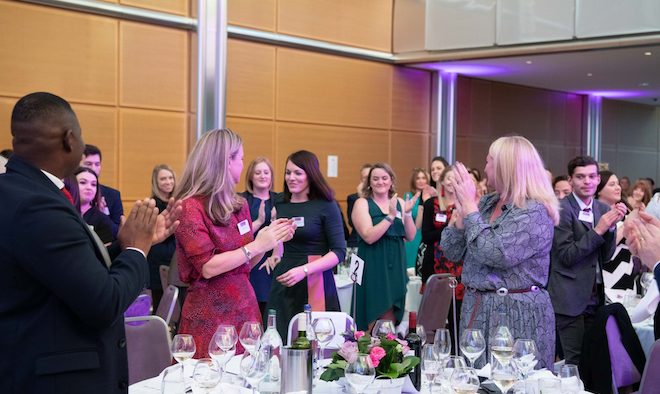 Some of the travel industry’s most inspirational women were celebrated on the 14th November, with the announcement of the winners of the 2018 IBM iX everywoman in Travel Awards at London’s East Wintergarden.

The awards, now in their second year, highlight and commend those with the qualities, attitude and commitment to supporting other women that mean they excel in their careers as well as inspire success in others. New category awards for 2018 included the Leader of Change Award, International Inspiration Award and the Male Agent of Change Award, awarded to a man for his commitment to the progress of women working in travel.

One category that is always one to watch though is the Woman of the Year Award, awarded to a woman under 30 making a significant contribution to the travel sector. This year it was won by airline Captain Kate McWilliams, who became the world’s youngest female airline captain in 2016 at the age of 26.

Reaching this rank – at any age – makes her part of an extremely select group of women; only three per cent of the world’s pilots are female with only 450 female airline captains in total in the world.

It’s an achievement that encapsulates the drive and determination that lies at the core of these awards. Kate started flying in the Air Cadets aged just 13 but was actively discouraged at school from becoming a pilot. Determined to succeed at her chosen career, regardless, she began commercial flying training on her 19th birthday; by the age of 21 she was a first officer with low-cost airline easyJet.

On reaching the rank of captain just five years later, she was modest about her early success: ‘Personally, I don’t think [it] matters. I’ve been through the same training and passed the same command course as every other captain so I’ve proven myself capable regardless of my age.”

However, she continues to be a champion for gender diversity in the aviation industry – as an easyJet pilot, flying A319 and A320 planes to over 100 destinations in the network, she is still only one of only 162 female pilots at the airline out of a dedicated workforce of around 3000 pilots.

As such, she has become a key player in developing and growing the airline’s Amy Johnson Flying Initiative – named after the pioneering English aviator – which aims to tackle an industry-wide stereotype around women in aviation. The programme’s initial aim, when launched in 2015, was to double the number of new female entrant pilots at easyJet from 6 to 12 per cent over two years, but it reached this total in year one –  prompting a more ambitious target of 20 per cent of new female entrant cadet pilots recruited by EasyJet by 2020.

As both a keen mentor and a Training Captain, a position that less than 0.1 per cent of women currently hold, Kate’s success is integral to helping to show other women that it is possible for them to achieve success in a commercial flying career. Further afield, Kate’s work as a motivational speaker and involvement with schools and youth organisations looks to inspire youngsters at ground level to consider taking off in a career in the travel industry – and to aim high.

Karen Gill MBE, Co-founder of everywoman said: “Our recent white paper showed that access to female role models is a major source of inspiration for 74% of women. This is why visible female talent is essential in all industries – you can’t be what you can’t see. By showcasing the success stories of this year’s winners- such as Kate McWilliams – we, along with IBM iX, are determined to encourage the individuals that’ll make a valuable contribution to the future of the UK’s thriving travel sector.”

Receiving the award from Debbie Vavangas, Digital Strategy and iX Lead, UK, IBM, Kate said: “I’m absolutely shell-shocked, I really didn’t expect this and it’s such an honour to win. If you see anyone in the sector who is doing something amazing – nominate them for an everywoman award. It will give them so much confidence to continue achieving more.

“It’s great to be part of the everywoman family now, and it is another platform on which I can shout about the importance of role models. We’re all role models and we can really encourage the next generation to achieve their dreams.”

EasyJet COO Chris Browne added, “I am absolutely delighted that our very own Captain Kate McWilliams has won this award. Anyone who has been a finalist or participated in these awards should be proud of what they have achieved; be confident, don’t doubt yourself and most importantly be the role model every other woman wants – and needs – you to be.”

Pushing boundaries, dissolving stereotypes and breaking the mould of what people expect a pilot to be – this year’s Woman of the Year award winner is proving that for her, and for a new generation of female pilots, the sky really is the limit.

SIGN UP
PrevPreviousJo Salter, Director in Technology & Investments, PwC
NextHumans of Experian – celebrating the stories that make us who we areNext
We use cookies on our website to give you the most relevant experience by remembering your preferences and repeat visits. By clicking “Accept All”, you consent to the use of ALL the cookies. However, you may visit "Cookie Settings" to provide a controlled consent.
Cookie SettingsAccept All
Manage consent