“YOU CAN’T SEE THE GLASS CEILING IF YOU’RE STANDING ON IT…” HOW REAR ADMIRAL JAMES MACLEOD IS SPEARHEADING GENDER DIVERSITY IN THE MILITARY. 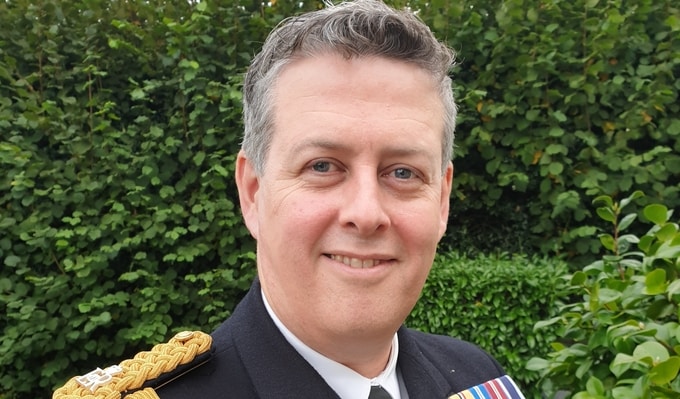 Rear Admiral Macleod, Assistant Chief of Defence Staff Personnel Capability for the Ministry of Defence (MOD), knows about getting things done. During his 31 years of service, he has seen both active duty and worked in defence policy, making him well-placed to take a wide view on diversity and inclusion across different roles in the services. Over the course of his career, he noticed that there have been times when the playing field hasn’t always been level. This sentiment has been acknowledged and recognised in recent MOD reports, with activities focussed to improve the live experience for female personnel. From Rear Admiral Macleod’s experience, he cites a conversation he had early on with a female colleague who pointed out the ways the male environment on warships was being reinforced by the terminology and signs used ‒ ‘Man Overboard’ and ‘Officers and Duty Men Only’ being some examples.

I found myself rolling my eyes and thinking, it’s just words, and then I realised that what she was telling me is that she was surrounded all the time by phrases and things that don’t include her. And that these aren’t just ‘little things’ ‒ in isolation, yes, but put them all together and you’re having a subconscious impact on people all the time.

During his career, he has become ever more aware that the majority of people sitting ‘round the table’ are white and male. This led him to challenge the norm, championing the importance of diversity and that we all can do something about it, starting with himself.

I decided that the best thing was to take on one element and wanted to make a difference, focussing on gender seemed obvious to me ‒ 50 percent of the population is female, we don’t have anything like that representation in the military. I’m senior enough to be able to make things happen. But I didn’t know exactly what we needed to do and what would make the most difference ‒ and the last thing the world needs, is another senior male officer telling women what needs to happen. I realised that female colleagues knew how to overcome the challenges they faced and what Defence needed to do to improve their lived experience. I very much saw myself as the person who held the door open for other people to go and do what was needed.

The scarcity of senior female leaders is by no means a simple problem as there are many influencing factors. One of which includes the historical recruitment and progression structures, where change in both the British Military and in overseas counterparts, does take longer compared to other organisations. Rear Admiral Macleod describes this further.

Because we’re ‘base-fed’, we can’t just bring in senior people to bolster the numbers. What we have to do is use the talented people we have, particularly in the officer corps, and support them to become the high-quality leaders of tomorrow.

Rear Admiral Macleod continues by illustrating that early initiatives are beginning to show progress, but emphasises more can be done to improve gender balance.

Our statistics are getting better, but it takes about 30 years to progress [through the ranks], and we only introduced joint training for men and women in the Royal Navy about 28 years ago. Next year [2022], we will have our first female regular service Admiral. In terms of timeline, it’s not good, but we’re getting there.’

Rear Admiral Macleod and his team realised that to effect change, a cascade of initiatives was needed. All of which rely heavily on sharing knowledge and perspectives and being open to challenge the status quo. One initiative that has worked well includes encouraging the female networks within the Military services to bring together male allies which has had profound results.

We held workshops with key senior leaders in command jobs, responsible for delivering the defence output, and therefore [they are] huge role models. We invited female personnel to come in and talk to them about their lived experience. What we found is that the majority of those who attended changed the way in which they approach things. Opening themselves up for that conversation is probably the thing that allows male allies to have the most impact.

Another initiative investigated the policies and processes around personnel recruitment and retention. The results highlighted what the Military was doing well and where processes could be more flexible.

We’ve also been looking at how we promote people, and in particular [asking] why do we lose women around the age of 30? It must be because our policies, which have evolved over time, are not inclusive for the modern workforce. It’s about giving people life choices and [making sure we’re not] discouraging people who can and want to add value. We shouldn’t be structuring careers so that [the key jobs that will decide whether you’re going to become a senior officer come] at a point at which women may wish to have children. We need to be much more flexible in how we allow talent to move through the organisation. And we need to avoid confusing time in a job with potential and talent.

Changes like these and those in wider Defence are providing the opportunity to gain a better understanding, resulting in policy reviews that look to ensure they support a modern workforce and empower personnel to achieve their full potential.

OUR FUTURE DEPENDS ON TODAY’S ACTION

While there’s work to be done, the winds are favourable. Activities like everywoman’s membership, reviewed policies such as flexible service and joint parental leave and the 30% target mentioned in the recent House of Commons Defence Committee into Women in the Armed Forces report, are just some examples of how Defence is continuing efforts to improve women’s experience and support a more diverse and inclusive future workforce. All personnel are responsible to shape this future, which includes supporting each other to see what we can do better. Rear Admiral Macleod shares an example where he engaged with a colleague on an emotional level and shared a lived experience example so that his colleague could see what was unknowingly hidden to them.

The majority of people don’t come to work to make life difficult for the people they work with. If I hear a story and there’s somebody involved that I know, I’ll often ring them up to discuss it. Without fail they are unaware of the impact they’re having and fix it straight away. They just weren’t aware of it because it’s not their lived experience. And we’re all victims of our own experience. People are often not aware they’re stood on the glass ceiling until it’s pointed out to them.’

Admittingly, ‘seeing’ the need for change personally and when speaking to colleagues can be confronting and challenging. It can be a struggle not to instinctively push back or shrug it off. However, becoming a male ally who makes a commitment, visibly shares experiences and learnings, and leads by example has led Rear Admiral Macleod to witness personal, team and organisational growth. And there is no turning back!

Continual learning has been one of my biggest lessons and it’s actually quite scary. Because I don’t like to show weakness or expose myself to things [that] I might get wrong. I’m more nervous talking to a group of women about what I think we need to do about gender diversity than I am briefing the Secretary of Defence, because I’m in an area where they have far more experience. I learned early on that you have to be prepared to get it wrong, but also that it’s alright if you get it wrong too ‒ as long as you’re trying, willing to accept you’ve got it wrong and you’re sincere. I had to get over that though and just tell people why I believe things ‒ then show by my actions that I’m living that.’

SIGN UP
PrevPreviousSIX WAYS TO BE YOUR OWN ROLE MODEL AT WORK
NextINVESTING IN A DIVERSE FUTURE: THE LINK BETWEEN HOW WE SAVE OUR MONEY AND THE GENDER GAPNext
We use cookies on our website to give you the most relevant experience by remembering your preferences and repeat visits. By clicking “Accept All”, you consent to the use of ALL the cookies. However, you may visit "Cookie Settings" to provide a controlled consent.
Cookie SettingsAccept All
Manage consent