You and your creativity: 8 surprising sources of better ideas 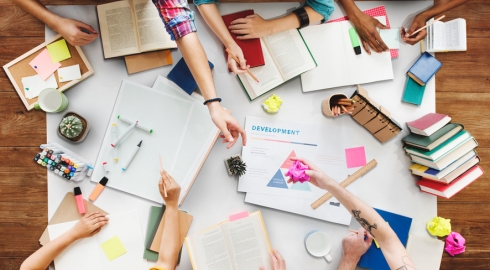 We all need to be creative in the workplace – to come up with new solutions to problems and find better ways of working.

In the everywomanNetwork workbook Unleashing your creativity in the workplace, we delve into the fascinating process of idea generation and how it can be kick-started.
Discover how you can dial up your innovation with these science-backed ways for boosting your brainstorm prowess.

It might be the enemy in your productivity, but putting tasks off until later might just make the results all that more ingenious.

Scientists say that our initial ideas are often the most conventional ones, whereas if we let thoughts incubate while we do something complete unrelated, they might just evolve into something altogether more special.

The history books would appears to agree: Leonardo Da Vinci’s diaries reveal his frustration at the constant distractions that plagued the 16-year period it took him to complete his masterpiece Mona Lisa.

And Martin Luther King – who once said, “procrastination is the thief of time” – famously scrapped his intended talk at the last minute and wrote his now iconic “I have a dream” speech on the cuff.
Source

It can help alleviate the afternoon slump, reduce stress and increase your mindfulness – and now there’s another reason, besides keeping fit, to walk, swim or go for a jog: a New York neuroscientist says it stimulates the hippocampus,
the area of the brain largely known for enabling memory, but also responsible for imagination. Source

A prisoner was attempting to escape from a tower. He found a rope in his cell that was half as long enough to permit him to reach the ground safely. He divided the rope in half, tied the two parts together, and escaped. How could he
have done this?

How you approach this dilemma would depend, say scientists, on whether you’re told the exercise was posed by tutors at the nearest educational institute, or those at a college on a different continent.

Although the geographical origin of the various tasks was completely irrelevant – it shouldn’t have mattered where the questions came from – simply telling subjects that they came from somewhere far away led to more creative thoughts.”
Source

As the above study demonstrates, you don’t have to hit the gap year trail to benefit your creativity – psychological distance can be just as powerful.

Read travel magazines and books, and when faced with a problem, challenge yourself to see it from the perspective of your favourite celebrity, a colleague with a different viewpoint or someone from a completely different walk of life.

Standing desks might be all the rage right now, but there’s a reason why you might come up with some of your best ideas while you’re laid up on your sofa – organisational psychologists say that the more comfortable the chair, the more
ideas you’re likely to generate.

If the sofa is made of natural ingredients like leather then all the better, and if it’s in a quiet space where you won’t be interrupted, away from music and near a window affording natural sunlight, you have the perfect backdrop for a
brainstorm. Source

That our best ideas come to us in the shower is a cliché you might be used to hearing. But there’s some truth in it. The seeds of wonderful ideas you’re not yet conscious of are germinating in your brain as you read this, and the key to
sparking them to life is to allow your mind to wander.

Scientists say that taking a walk from your desk, chatting with a colleague about something completely non work-related or even watching a funny video on YouTube can create the space in your mind for ideas to spring forth.
Source

Victorian novelist Charles Dickens found it while walking for 12 hours per day in the Kent countryside. Jazz musicians and rappers need it to facilitate improvisation. And Alexander Graham Bell, father of the telephone, was so convinced
of its importance to his productivity that he slept through the day’s distractions, rising in time to work from 10 o’clock at night through to the small hours.

Solitude has been one of the cornerstones of the creative process of many a genius, and study upon study backs up that isolation is crucial for unpicking ideas from the brain.

Experts advocate taking long walks, creating quiet spaces in the home or office for mindful meditation, or simply building into your schedule whatever activities normally allow you to daydream in peace.
Source

Keyboards, smartphones and note-taking apps may have substantially reduced the amount of time you spend putting pen to paper, but studies show that occasionally reverting back to longhand could stimulate the mind’s reticular activating
system (RAS), essentially a filter for everything your brain needs to process.

The upshot is that the act of writing can allow you to distil your thoughts more effectively, along with a bunch of other benefits including better recollection and more likelihood of reaching goals.
Source

Whether there’s a super creative person in your life, or you admire such a character from afar – your favourite writer, stand up comedian or start-up entrepreneur – there’s evidence to suggest that imagining that you are them can
inspire you to bring forth more innovation.

On the flip side, if they’re a very pragmatic, no nonsense, non-creative type, channelling their behaviours can mean you produce fewer ideas.
Source

SIGN UP
PrevPreviousNetworking 101: How to shine at an event (part four)
NextPersonal brand and your team: making it famous for the right reasonsNext
We use cookies on our website to give you the most relevant experience by remembering your preferences and repeat visits. By clicking “Accept All”, you consent to the use of ALL the cookies. However, you may visit "Cookie Settings" to provide a controlled consent.
Cookie SettingsAccept All
Manage consent