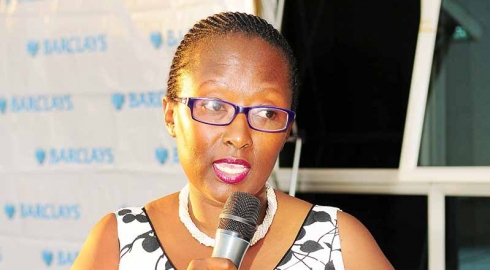 The everywomanWorld series catches up with Financial Controller Enid Katorobo as she prepares to leave her current role – and her home country – to head up change in the financial control division of Barclays Africa’s head office in Johannesburg.

Growing up, I was interested in languages and culture, fuelled by the fact my father’s professorship took our family all over Africa; we lived in Botswana, Lesotho and Tanzania, as well as Uganda. My mother worked too, finding teaching positions wherever we travelled. As a young girl she achieved the highest exam results in her district, winning a scholarship to one of the best schools. She was a huge role model for me, not just because she worked so relentlessly, but because when she took a step back from her career to raise five children, she approached that role too with pride and excitement.

Starting out, my perception of the financial world was of a dry, boring place. My first role – for the charity Water Aid, which aims to alleviate poverty through safe, clean water – introduced me to accountancy when my administrative department was merged with finance. I was promoted to head of both divisions, and, wanting to excel, I took a chartered accountancy course, ACCA, through which I came to understand that finance contributes enormously to development in Africa, where lack of access to finance is a major inhibitor to business growth and poverty alleviation. Combatting poverty isn’t about handouts; it’s about empowering others to achieve their financial goals.

My move to Barclays allowed me to continue my vision of finance as an enabler. We have a heavy focus on citizenship and I’ve helped drive that agenda by going out into communities and teaching financial literacy to young people. That’s become a hugely satisfying part of my role.

I also realised that it’s possible to be a creative accountant – not in a way that has the auditors after you! But in how you approach teamwork, ideas and solutions, improving your environment, and dealing with people. I think that my love of poetry and drama gives me an edge in the financial world – the softer skills are just as important as the numerical skills.

I live 10 kilometres outside the city but it can take an hour to reach work in heavy traffic. We report to work at 8.15. I take time to greet my team and make a plan for the day. The financial world is deadline driven so there are always reports to file, audits to submit and transactions to approve. High pressure can mean my team works long hours. I focus on creating a good environment that people want to work in. If we’re staying late, I make sure we have music, food and laughter. Stress is often the outcome of our own expectations not being met. If you acknowledge that mistakes happen, you deal with them when they occur.

I adapt my leadership style to suit situations. Sometimes people need space; sometimes they need direction. Overall I believe in allowing people to get the job done without un-necessary interference.

In high school I was made head girl. I was an autocratic leader, getting people out of bed at 6a.m. and pushing them around! After two months of very passionate work I was demoted for being too strict! I’m glad I learned early on to strike a balance between goal-orientation and focusing on people, their feelings and motivations. You don’t win by scaring people; it’s a costly mistake and one I’m glad I learned early.

My travels taught me that all cultures are similar even if they have different ways of expressing themselves. If you look beyond external differences, you find warmth, good humour, pain, complexity, intrigue and friendship everywhere. Our underlying humanness is always the same.

Learning on the job

As the child of two educators and a booklover, I’ve seized opportunities to study. As well as specific knowledge, training got me thinking about how I maximise my potential and that of others, and eliminated a lot of limiting beliefs. Whenever I benefit from training, I pass it on to my teams and mentees, encouraging them to be the best versions of their authentic selves.  I love seeing a disgruntled, disillusioned employee heed advice and emerge excited and motivated, blossoming into more than they imagined they could be.

I had to be convinced there was a need for a Women’s Network Forum in Barclays. I avoided it, but when my line manager built attendance into my diversity and inclusivity goals, I went to a breakfast. One thing led to another and I ended up being voted budget co-ordinator. Slowly but surely I began to see that the Network is vital. Two years later, I was appointed Chairperson. There are definite challenges for women in Africa. In workplaces they are equals and assertiveness is encouraged, but in the home, a woman is supposed to be submissive. Reconciling these two roles can present problems – women hesitating to seize opportunities to study or progress for fear of the implications at home. The Network is a place to meet, discuss and, ultimately, encourage confidence in one another. Coming to this realisation was also a good reminder to always listen, never judge.

When a bigger role arose in South Africa, I saw it as an opportunity to grow, learn and give more of myself. As the poet Oliver Wendell Holmes said, lots of people go to their graves with their music still in them; they haven’t played enough of their song. I see my career as a journey; every step adds up and no single role is the final destination.

SIGN UP
PrevPreviousA senior manager’s personal strategies for overcoming Impostor Syndrome
NextMentoring inspiration: Unlikely sources in everyday lifeNext
We use cookies on our website to give you the most relevant experience by remembering your preferences and repeat visits. By clicking “Accept All”, you consent to the use of ALL the cookies. However, you may visit "Cookie Settings" to provide a controlled consent.
Cookie SettingsAccept All
Manage consent