My sexist encounter was the catalyst for company-wide change 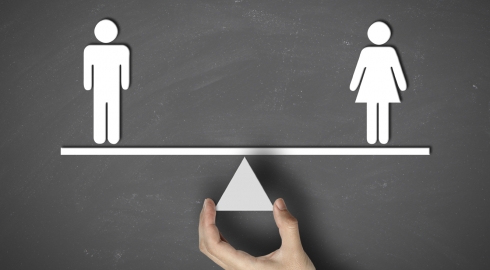 One week earlier, I’d sat in a meeting with other members of our women’s network and reacted with shock at the stories being shared about the sexist behaviour of male colleagues. I felt I had nothing to add to the conversation, but that was soon to change.

A newcomer on the apprenticeship scheme I’d once participated in and now ran, was doing a sponsored silence for charity. As she couldn’t speak, I walked her around the office explaining what she was doing and asking for donations on her behalf. On one floor – made up of around 75% male workers – we encountered man after man saying he wished the women in his lives could be as readily silenced.

One or two would have gone over my head, but as we navigated the floor, surrounded by pictures of naked women pinned to noticeboards, we met with what felt like an onslaught of casually sexist remarks.

A ringleader of the group suggested that as women we shouldn’t just be silent; we shouldn’t be in the office at all. I called out the inappropriateness of his telling two female colleagues that they “belonged in the kitchen”, but it simply set off a chain of laughter. A handful of women in the vicinity were keeping their heads down and I couldn’t help wonder if they were spoken to like this on a daily basis.

I went back to my desk, grabbed my things and went home for the day. I lay in bed for hours reflecting on what had happened, and realised that, in reality, this wasn’t my first experience of sexism at the company. A former manager had frequently made sexually explicit remarks to me whenever we were alone. Over time, incidents like these, combined with my previous experience in a male-dominated organisation, had hardened me to this kind of behaviour; I’d simply been shrugging it off. But this latest episode had tipped me over the edge. The other witness was someone who literally didn’t have a voice. How many others felt powerless to speak up and challenge unacceptable behaviour? How many were offended like this regularly? How many weren’t performing to the best of their abilities – were being held back in their careers – because of this toxic environment?

Once I was feeling calmer, I sent a note sharing my experience with the women’s network.

My HR representative invited me to initiate a formal grievance, but I didn’t want to create more conflict – I wanted to instigate progress and change.

Besides, I really loved my role and felt loyal to the company who’d taken me on as a trainee and invested time, support and energy in my development, offering me a great role when I completed my apprenticeship. One of my reasons for joining in the first place was their great reputation for harnessing young – and female – talent, and they’d lived up to all those promises. I felt an obligation to help make things better, as well as more determination than ever to prove my worth and turn all the negativity into something that could positively impact my career.

Through a combination of widespread efforts, we’re now, as a company, planning an ambitious programme to instil greater awareness.

Discussion groups, open to anyone who wanted to come, have taken place across the country. What’s been great is that men have been coming along too, curious to understand more about the issue. One man wanted to know how he could better support a pregnant co-worker. It’s sparking a much wider conversation, and the more people of both sexes who get involved, the better.

I’ve also helped shape a new awareness-building course. Traditionally we use e-learning systems to spread training far and wide. I didn’t think 30 minutes spent at a desk watching a recording of women sharing their experiences of sexism was going to cut it. The teams here agreed, so we’re rolling out mandatory face-to-face sessions delivered through all departmental meetings. Women will share their experiences of sexism and its impact in a way that’s designed to give people food for thought. It’s a massive step forward. I hope men will get involved too; we need male champions brave enough to speak out against inappropriate behaviour and become role models for their juniors. I encounter men with the potential to fit this bill all the time, which is hugely encouraging.

We’re at the start of something and I’m sure the enormity of what’s happened won’t really hit me until the first team sessions roll out.

I know change won’t come overnight, but I like to think that this time next year, people, as a result of understanding how their words can hurt others, will think before they speak. I think that’s more than achievable within 12 months, so watch this space.

The everywomanIncognito series allows women to discuss personal aspects of their career development in complete anonymity. We welcome submissions from everywomanNetwork members on a range of topics. Get in touch if you’d like to find out more about Incognito or would like to suggest a story.

More from the everywoman Incognito series

Here’s what I learnt from my maternity leave

Lessons I learned from being the only female at the top

SIGN UP
PrevPreviousGoing extracurricular: successful women share the hobbies that inspire them
NextAuthenticity matters: why being yourself is bestNext
We use cookies on our website to give you the most relevant experience by remembering your preferences and repeat visits. By clicking “Accept All”, you consent to the use of ALL the cookies. However, you may visit "Cookie Settings" to provide a controlled consent.
Cookie SettingsAccept All
Manage consent