Judith Batchelar on being an authentic leader 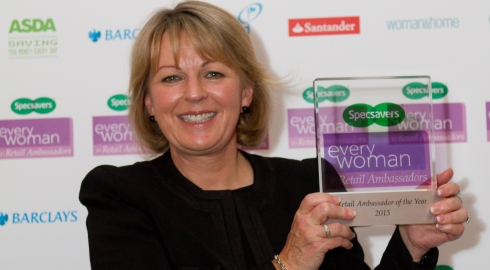 Announced as the inaugural Specsavers everywoman in Retail Ambassador of the Year for 2013, Judith is one of the UK’s most influential personalities in retail and a champion of sustainability and ethics. As Director of Sainsbury’s brand, Judith has had a massive impact throughout the company and further afield.

Described by the judges of the Specsavers everywoman in Retail Ambassador programme as ‘passionate, proud, inspirational yet modest’ – we caught up with Judith to get an insight into what motivates her and her advice on being an authentic and credible leader.

What does your job entail?

Essentially what I do involves being responsible for all products carrying the Sainsbury’s name. This involves over 12,500 products, with a turnover of over 10 billion, involving sourcing products from 67 different countries, be it Rioja wine from Spain, or parma ham from Italy. I think it’s simply the best job in the world!

Why did you want to get into this particular area of work?

I have always worked in the food industry, after working for a year as a research assistant in a pharmaceutical company; I knew lab work wasn’t for me!  I loved the science though but wanted to apply it more directly. I have worked for Marks and Spencer, Safeway and Mars as well as for a brewery company where I studied for a Diploma in Wines and Spirits, (which of course involved sampling the product!). I became very interested in how what we eat and drink affects us and our lifestyles, which influenced my decision to join Sainsbury’s.

Have you had any struggles during your career?

Like many women, it was a challenge bringing up my young children as a Mum and balancing work, with a husband who was also working hard and in a global role. The flexibility that thankfully exists now was certainly not as common in those days, for example part time working was just not available. I was lucky in that my boss was also a mother and was incredibly supportive, allowing me to work part time until the children were five. I believe that this was fundamental to my success. The things that we now take for granted were not the norm in these days but having a boss who firmly believed in passing on opportunities that she had not had – was just incredible.

What have been some of your highlights since starting your career?

My highlights all involve making a real and enduring difference. For example, over the past 25 years nutrition labelling on foods has been voluntary, it is only now, later in December 2014 that this will become compulsory. Sainsbury’s however has been providing the nutrition information since 2007 and we know that customers have shaped their purchasing choices based on this information, leading to healthier baskets for our customers. I take great pride in this.

Where do you see yourself in the future?

One of the things that I love about my role is the fact that I can get involved with projects that I am passionate about, outside of work, for example Farm Africa. This in turn helps me develop further in my role, by constantly learning and improving my expertise. Having the opportunity to continue to do this, for me is incredibly important.

Have you ever had to stop and think what motivates you in your career?

I think a real turning point for me was when I realised that what motivated me was essentially making a difference and was more about helping others to achieve more than they ever thought they could. Showing people that they really can achieve their potential is for me a massive motivator.

Have you ever had to focus on your confidence at any point in order to grow your career, and do you think that having an awareness of what makes you feel confident/unconfident is important in succeeding at business?

It’s really all about hard work and preparation. I’ve been in situations where I have felt nervous before, from my first board meeting, to giving evidence at a House of Commons Select Committee.  Everyone gets nervous but the better prepared you are the more confident you will be, I hate being unprepared and always ensure that I am a prepared as I can be which really helps. Having said that, sometimes being pushed actually makes you perform better – when you are outside of your comfort zone you can often do your best work.

I think it really helped when I realised that it’s not just about me, it’s about them (the team). Ask yourself – “why should anyone be led by you? What is it that will give people that all-important confidence in you?” I realised that the key to successful leadership was really simple, to connect people with what you are trying to achieve, and putting the customer at the heart of everything that you do – this will mean long term success. “A good leader should be the team’s first assistant” is something that I really live by – to be an inspirational leader you really have to have your team’s best interests at heart and to genuinely want them to shine. Show them that they can achieve their potential and you will be there to support this. This will come through and build a fantastic level of trust.

Have you had to handle critical situations and how have you dealt with these?

In retail, you are constantly delivering, there is always something happening! You have to always seek to establish the facts first and remaining calm is essential! For example, during the horsemeat crisis, although Sainsbury’s were not implicated we absolutely had to be aware of what was going on and to be prepared. Keeping people grounded is essential – I guess this really comes back to my scientific background, I believe in avoiding speculation and in thinking through all scenarios.  Seek out the best information, have the best data – this will ensure that you make the best decisions.

Above all it is about having empathy for the other person, put yourself in their shoes. Remember, however difficult it is to give feedback, it’s always harder to receive it. Listen to them and understand their position.  Have their best interests at heart, and remember the best advice may be telling them something that they don’t want to hear, it’s better to be totally upfront. I like to think the best way is to ‘be tough on the decision, but soft on the person’.

How was becoming the 2013 Specsavers everywoman in Retail Ambassador impacted your career?

It’s great to be recognised, especially as we do so much at Sainsbury’s to source ethically and sustainably – so it’s as much for me as it is my team who make sure that our values are embedded in our supply chain. It’s a great privilege and honour to know that I can inspire other women. If I can boost someone’s confidence or help them see that they can push themselves further, then it’s a victory for me.

What advice would you give to young women starting out in a career in retail?

Find someone that you can really trust, someone that will give you honest feedback and who genuinely wants you to succeed. Avoid people who demonstrate their success by making you look less successful or capable – what you want is to find someone with an ‘abundance mentality’- when we all look good the success will keep on growing. That is what you should look for.

Sainsbury’s is a really great company to work for – both for the range of roles available but there’s also a supportive culture and approach to help people develop and be the best they can be. We have a high proportion of senior women too, including on both our PLC and operational boards, so there’s no ‘glass ceiling’ and we believe in the power of engagement. This includes a lot of mentoring and networking to inspire younger women into senior roles.

SIGN UP
PrevPrevious3 Techniques to Boost your Problem Solving Skills
NextMindfulness: 4 quick meditation videos to improve your dayNext
We use cookies on our website to give you the most relevant experience by remembering your preferences and repeat visits. By clicking “Accept All”, you consent to the use of ALL the cookies. However, you may visit "Cookie Settings" to provide a controlled consent.
Cookie SettingsAccept All
Manage consent