Incognito: Lockdown enabled me to finally get sober and reclaim my life and career 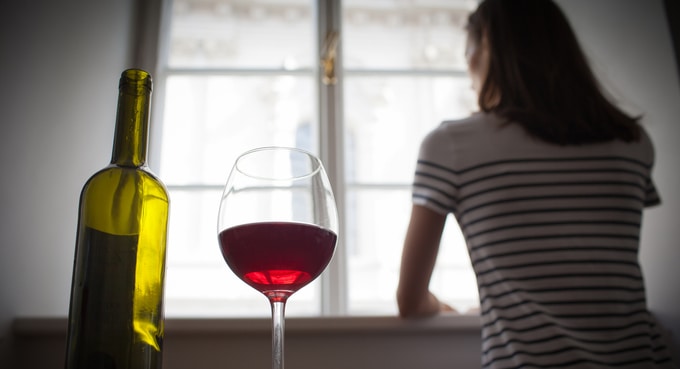 One of the first things I noticed when I moved from New York to London two decades ago is the extent to which drinking is so much part of the fabric of the everyday in Britain. My job in media sales involved wining and dining people in lovely places. You have to keep up with clients, so if they wanted to keep going after lunch, I went along with the credit cards to keep that happening — and I loved every minute of it.

I wouldn’t say I had an alcohol problem then, but my drinking was definitely escalating. By the time I left my role, seven years later, those consumption levels had just become normal. I took a role at a start-up, which was exciting, but, when three years in, my job hadn’t evolved — I grew bored.

I could do my work without really thinking, which meant I could party every night, then work a full day with a hangover and nobody would notice. I never drank before work, but we had regular alcoholic client lunches and it was typical for everyone to be hammered on Fridays, with beers on our desks from four o’clock and huge pub nights. I was extreme, even within that scenario — big drinking nights were not exceptional for me. My morning productivity has always been off the charts though, so no one could ever say I hadn’t done what I was supposed to do. The term ‘functional alcoholic’ could be applied to me.  A couple of times my line manager called me in and told me I was drinking too much, but I just replied that I was fine.

As time went on I got a big title promotion, but with nothing behind it, the boredom was worse. I thought that while I was drinking, I wasn’t bored and I wasn’t boring. I was hanging out with people just to fill time rather than be alone with my thoughts. I constantly felt awful and would often throw up in the loos in the mornings. My boundaries also became an illusion: if your rule is that you don’t drink at home, but you’re out six days a week, you don’t really have any rules.

I think the people who know me really got scared about my drinking though after my mom died two years ago. I had taken redundancy and set up my own events company, but I was in a dark place, pretending to eat and function, while not really functioning at all. Going from an employee to running my own company was scary even though everyone told me I was ‘killing it’. It was myself I was slowly kill though.

And then lockdown came.

We had started work on a big event, which got cancelled along with all of our bookings. I took on interim work with an awful company, so I quit and had a couple of 10-litre boxes of wine delivered. Then the wheels came off. I wasn’t working and my partner and I were living in separate households, so I drank morning to night. I couldn’t tell how much I was drinking because it was coming out of boxes. I didn’t leave the house other than to walk my dog.

Then I got a rash and I was terrified I had Covid-19. I got sick, had to stop drinking and didn’t leave my bed for a week. I still don’t know what it was. In retrospect, I wonder if it was withdrawal. All I could think was, ‘This is how I die’. And, ‘What do I have to show for any of it?’

Once I felt better, I decided to quit drinking for the rest of lockdown. I told my closest friend and my partner, and I’m sure they thought that it would be over in a week. The first fortnight was the hardest. I went to the butchers and the greengrocer to get fresh food, just to be able to stretch out the daily hour we were allowed out. I couldn’t really read for a couple of weeks as my attention span was poor, so I watched lots of TV and started taking sleeping pills to help me sleep. But as the weather got warmer, I slept better and began reading again — and I started to talk about sobriety with more people.

Everyone was having a weird time in lockdown, and in some ways that helped — I wasn’t trying to get sober in ‘normality’. After a couple of months, a friend sent me ‘before and after’ pictures of me, saying, ‘I want you to see what I’m seeing’. That inspired me to extend my sobriety for another month from the end of lockdown. Around that time, I talked to a doctor, who told me I wouldn’t regenerate physically if I started drinking again. Three months sober, I decided then I was truly done.

During that period, I remember walking by the river and seeing people laughing and drinking wine in a reopened pub, and I realised that the rosé wasn’t the part of the equation that I missed — it was the people. Drink wasn’t what made me interesting or interested in others; I decided that my personality was mine to own.

As an extrovert, I need the energy of other people around me to have big, creative ideas. One of my friends is in AA, where the idea is that you need sober friends and sober places for recovery, and you shouldn’t spend time in pubs. But I love pubs and talking to strangers and that’s not going to change.

Since getting sober, I’ve had some bad days where I’ve really missed my mom. But importantly, my mood swings and general willingness to want to see people and be happy aren’t dictated by a hangover or drinking anymore. Plus, I’ve started a new job which I’m excited about. I had a tough meeting a week ago and I was really nervous. Normally, I’d have had a glass of wine beforehand and believe nobody could tell. Instead I brought a big deal in — sober.

When you’re drinking, you’re funnelling money out the door and not getting any rewards. It’s so good now to spend time with my friends and not worry that they’re mad at me for something I did when I was drunk. I’ve found myself again without the huge buffer zone I’d established — and I like myself. I couldn’t have carried on as I was. There was no good end to that story.

SIGN UP
PrevPreviousHow to maximise your home working space — physically, psychologically and virtually
NextQuiz: What’s your negotiation superpower?Next
We use cookies on our website to give you the most relevant experience by remembering your preferences and repeat visits. By clicking “Accept All”, you consent to the use of ALL the cookies. However, you may visit "Cookie Settings" to provide a controlled consent.
Cookie SettingsAccept All
Manage consent