Incognito: I was pushed out of my job while on maternity leave 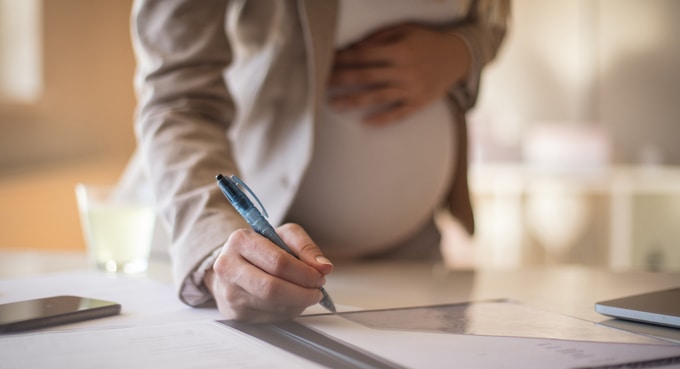 I was a Marketing Director for a tech company, working in a high-profile, global role which I loved, when I became pregnant with my first child. My pregnancy at work was uneventful up until a month before I went on maternity leave when a new CEO came in. The first thing he did was sack my line manager and reverse the agreement I had with her to work from home one day a week in the later stages of my pregnancy. That was how at seven months pregnant I found myself having to get on the Tube in rush hour every day. In hindsight that set the tone for what was to come.

I had hired John* to do my maternity cover, a man who had similar experience to me, but by the time I went on my 12-month maternity leave I was feeling a little exposed as my biggest advocate had been removed from her job. So, I kept in touch during mat leave, but in a hands-off way — I didn’t want to be the ‘ghost at the feast’. Three months before I was due to return I got in touch to ask for my old working pattern — working from home one day a week — and to be able to leave half an hour early twice a week for nursery pick-up.

I was asked to come on a call to discuss my request with the CEO and HR Director where I was told they’d changed their policy and I could do the two half hours but not the homeworking, At the end, the CEO told me casually that they were looking to keep John in the business to ‘work on projects’.

Two weeks later, I was called to another meeting by the HR director and CEO, who announced that John had been made Vice President of my department, and would now be my boss. When I pointed out some discrepancies, the tone became aggressive. I felt as if I’d been punched in the stomach. I went to the HR Director and asked when the job had become available and why I hadn’t been considered for it as the incumbent. I also asked how a company of our size could justify having a Vice President AND a Director of marketing. She blandly replied that I was ‘a valued employee’ but that John was ‘more senior’ than me. I’d apparently been screened for the role, but ‘didn’t have the experience’. This made me certain that the second I returned to work and wasn’t covered by maternity legislation, my job would be made redundant.

I tried to discuss the direct experience I had of the things that they said I lacked, but it was now clear the conversation was going nowhere. I could see this wasn’t a good place to be, so I spoke to a lawyer and that began a horrendous period of backwards and forwards, their argument shifting from whether I was experienced enough, ‘had or hadn’t expressed interest’ or whether it was a ‘new role’ that they had created. The brinksmanship consumed me for the last three months of my maternity leave and stopped me enjoying that time with my new baby. Instead, I was suddenly facing a very different financial future and getting increasingly stressed as the deadline for either going to a tribunal or returning to work fast approached.

In addition, I had already paid in advance to put my son into nursery a month early so he could settle before I went back to work and I don’t know if he picked up on everything that was going on for me, but he didn’t settle and ended up screaming the place down. It was soul destroying.

My lawyer counselled me not to go to tribunal, that it would be traumatic with no guarantees at the end, and that I should resign. By this stage, I thought that there was no way I could return to work anyway, as I felt utterly humiliated.

In the end, it was only because I had been forensic about keeping records that I managed to resolve it at all. It all came down to words: the HR Director put something in writing that my lawyer could prove was untrue to do with the fact I was never offered the opportunity to apply for the promotion from my job, which is illegal under UK maternity law. My lawyer told the HR Director her professional reputation was on the line and the day before I would have had to put in for a tribunal they settled, with an NDA.

I had to say that I had walked out of the job rather than it was made impossible for me to stay, which then made it difficult when applying for other jobs — a new mum who walks out of a job after a period of maternity leave tends to send recruiters running a mile. The settlement was enough to stop us worrying financially for a few months, but I was devastated, and deeply disappointed; I knew that this role was the best work I’ve ever done — the only thing that had changed was that I had a child.

I’ve thought a lot since about why it happened. The CEO was an aggressive ‘blokey’ man who just didn’t see my value, and I wasn’t the only woman that was removed; when I went on maternity leave there were six senior females in the company, by the time I left there were two, one of whom was the HR Director. In hindsight, I also wonder whether they weren’t expecting me to come back, or that when they rejected my flexible working request, they thought I’d just huff off. I really don’t think they expected me to involve a lawyer. I presume the CEO thought he could intimidate me into resigning.

What was certain though was that I’d gone from being in a senior position to not feeling I could even apply for those kinds of roles. I think it was partly the injustice of it all that took my confidence away, but also being treated so aggressively and knowing that people in authority were lying. It felt very personal that people I’d worked with were doing this, especially the HR Director who I’d previously had a good relationship with, and who is supposed to ensure things are legally correct.

If I were ever in that situation again, I would be clearer about what I would be returning to and my working patterns before going on maternity leave. I put too much faith in assuming it would all be OK and that the good reputation I had at work before I became a mum would be enough. Cynically, I’d also hire somebody a bit less competent to cover my leave and the whole experience has also made me think twice about hiring a man to cover maternity leave, to be honest.

I’m not sure solving maternity discrimination is necessarily about strengthening the statutory rights around it though, because companies can find ways to abuse those. It’s about a culture shift away from looking at motherhood as something that is inconvenient for business. In society, women aren’t celebrated for having children or wanting to work, so you are hit from both directions. I think it also must be looked at from the other side and shared parental leave needs to be paid — at the moment it’s a nonsense and doesn’t make any financial sense for men to take it so businesses know that it will be lower-paid women taking the extended time off work and the discrimination against mothers continues. We need to de-gender the whole area so that when an organisation hires a 33-year-old man, they know there’s a possibility he too might take off six months somewhere down the line.

Overall, I was one of the ‘lucky’ ones. Yes, the experience was humiliating and confidence-destroying, but I had the ability to pay for a lawyer and have rebuilt my career over time — my current job is a senior role in a lovely business that helps parents to navigate their careers and I’ve turned my personal experience into a passion for this company to succeed. For many women in low-paid jobs though, that simply wouldn’t have been an option, which makes me think the unreported levels of maternity discrimination must be higher than anything that is being reported.

*Name has been changed

SIGN UP
PrevPreviousHow to use ‘job crafting’ to transform your career
NextVirtual brainstorming: How and why you can be your creative best while working from homeNext
We use cookies on our website to give you the most relevant experience by remembering your preferences and repeat visits. By clicking “Accept All”, you consent to the use of ALL the cookies. However, you may visit "Cookie Settings" to provide a controlled consent.
Cookie SettingsAccept All
Manage consent