Incognito: ‘I almost gave up my career because of my hearing loss’ 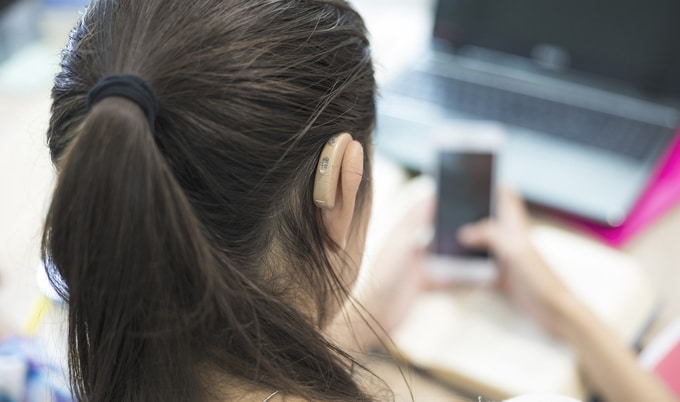 In my late 20s I started to notice that I was finding it hard to hear what people were saying, particularly at work. If someone stood next to my desk and said something in a quiet voice, or asked me a quick question in a meeting, I’d miss parts of it and wouldn’t be able to contribute. I just felt a bit ‘thick’ really; as if I was just not following things, while everyone else seemed perfectly able to.

I was working as a finance director at the time — a role that came with private medical cover, and as such I received full medicals which included a hearing test. It seems obvious now, but at the time it never really occurred to me that I might be deaf. When the doctor informed me that I had the hearing of someone in their 70s, I felt relieved: now there was a reason why I couldn’t hear people properly.

It was suggested I get hearing aids in both ears, but at the time I was a single parent and didn’t have a lot of money, so I opted for some free ones from our healthcare service. They were large, awful things and I didn’t wear them for long because they were uncomfortable, but also, mainly, because I didn’t feel that they were making that much difference.

I also felt self-conscious about wearing hearing aids. There’s a stigma attached, and the only way I could cope, and feel more in control, was to laugh and joke about them. At some point, I was talked into getting more sophisticated aids which sit inside your ear and are less visible. They are very expensive though, which isn’t great when you lose them on a night out. But they definitely made a different to my confidence — as well as to my hearing — and that was probably when I began to feel I could be more open about my hearing loss at work.

I tend to say ‘I am deaf’ rather than that ‘I have severe hearing loss’ — people find that easier to understand. And the way people deal with that information tends to vary. When diagnosed I had a very supportive CEO who would joke and phone me up and say, ‘Have you got your hearing aids turned up?!’ My next employer was a bigger company, with a less caring environment, where I found things far more difficult.

During my time there, it seemed incumbent on me to help myself and find a way to work with my impairment. So that is what I tried to do. We’d have Monday meetings with 20 people in the room, and I would sit at the end of the table and often not be able to tell what was going on. I started to tell people that I was deaf, and one day I asked to sit in the middle of the room. From then on, I’d sit in the middle whenever I could, and realised that this didn’t just help me hear better; it enabled me to have more influence in the meeting too.

The meetings I found most difficult were those with the board. I couldn’t sit in the middle of the room because that’s where the CEO and CFO sat, so I sat on the end where the acoustics were awful. I didn’t feel that I could say, ‘Can you repeat that for me?’ and there would be moments when I would sit there thinking, ‘I don’t know if I can do my job anymore, because this is really hindering me.’ Social work events were also incredibly hard, to the point I considered not going as I just couldn’t be part of the conversation with so much background noise.

My central stakeholders at that time were two people with very different attitudes. One understood and knew I couldn’t hear if she whispered to me in a meeting, so wrote things down instead. She was replaced though by someone who was much less tolerant — she once said it was very frustrating for her that I couldn’t hear.

In the meetings where I felt comfortable it was because I generally had a big enough role and good enough relationships with people to be able to say I couldn’t hear or ask someone to take notes for me. In less comfortable situations, I usually said nothing. On reflection, I could have spoken to somebody ‘offstage’ and said, ‘What can I do? I’m really struggling’. And I probably should have done.

It helps to be in a leadership role and to be able to arrange meetings in a way that helps you. But as an entry level employee, you’re not going to be able to do that. And that’s why leaders with hearing loss need to be part of an awareness piece to allow people to speak up.

I’ve joined the board of the Royal National Institute for the Deaf, which has done a lot of research into deafness and inclusivity in the workplace. I think half the problem is people don’t feel that they can share their hearing problems because of the stigma. Added to that is the belief that even if you do share, there’s very little someone else can do to help. But there are things that can be done — something as simple as rearranging the room or bringing in some new technical aids.

The rise in tech wearables has been an unexpected saviour. More and more people are walking around with white buds in their ears and they don’t look a million miles from the technology I use. I can get podcasts and music Bluetooth-ed to my hearing aids now — as well as phone calls. And in the future, if more people are going to listen to things through stuff put in the ear then hopefully more people who need help will opt for hearing enhancement too.

I’ve had a bumpy road of feeling different things about my deafness and how it affects my work at different points in my career. Reflecting on it, there are certain times where I’ve been able to be open and honest and ask for help — and other times when I’ve just felt I just couldn’t do my job.

I once managed an overseas team in India, and video conferences were impossible because I didn’t understand a word. I find certain accents really hard – Scottish is another one that’s tricky for me — and there’s only so many times you can ask somebody to repeat something, because after a while it makes conversation too frustrating.

I learned early on though that I had to face into it with people and that the best way is to say something about it straight away. It’s not embarrassing to me and I think people are only embarrassed if you’re embarrassed. Ultimately, I think there is a total lack of understanding or awareness around the challenges of being deaf in most workplaces. One in five people have a hearing impairment, and they’re not all older people. But it’s just not on anybody’s radar, and there are a lot more people who need help than people realise.

SIGN UP
PrevPreviousPressing reset on your career: five ways to start a new chapter even if you’re staying in the same job
NextFuture proofing your career (part 4 of 4): Setting and achieving goals in an uncertain worldNext
We use cookies on our website to give you the most relevant experience by remembering your preferences and repeat visits. By clicking “Accept All”, you consent to the use of ALL the cookies. However, you may visit "Cookie Settings" to provide a controlled consent.
Cookie SettingsAccept All
Manage consent