HOW DO YOU ‘COME OUT’ AS FEMALE IN A MALE-DOMINATED INDUSTRY? CHRISTINA RILEY REFLECTS ON HER INCREDIBLE JOURNEY 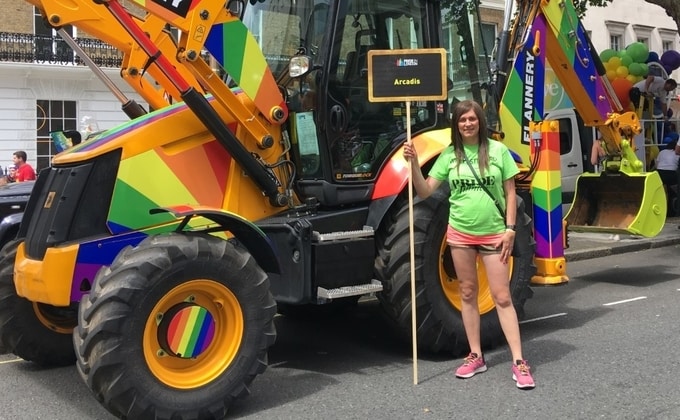 During her 30 years in the construction industry, Christina Riley has experienced the culture both as a male and a female. A poster for a new LGBT network was the catalyst for her life-changing decision to transition from male to female, and saw her become a powerful advocate for change in the sector.

YOU STARTED YOUR CAREER IN CONSTRUCTION WHILE STILL LIVING AS A MAN. TELL US ABOUT THAT TIME IN YOUR LIFE.

Even before I began work, my life was quite male-dominated. I grew up in a family with four brothers and attended an all-boys school. Later, I did a building engineering management degree and I think out of 50 people on the course, there were only two women. As part of my degree, I did a year out in a construction role, which was, and still is, quite a tough industry — very masculine, where you’re very much expected to be hard and tough and put up with long hours, getting dirty and being out in the freezing cold. Back in the ‘80s and ‘90s, we used to do initiations ­— bullying, effectively. So the culture back then was really not pleasant and it’s not surprising there were such low numbers of women in the industry.

WHERE WERE YOU IN TERMS OF YOUR PERSONAL JOURNEY AT THAT POINT? DID YOU KNOW THEN THAT YOU WANTED TO TRANSITION TO FEMALE?

Back then, I didn’t know I was trans — when I was a teenager, the word transgender wasn’t really in the vocabulary. Trans people working on the television were a bit of a laughing stock; the comedy shows back then always had a transvestite-type character. In both my work and home life, I was overwhelmed with male role models around me, but next to no female role models apart from my mum. I just never felt I fitted in; never felt I was ‘one of the lads’. Over time, going into my thirties, I started wearing more feminine clothes and going to LGBT nightclubs. And what I realised was that when I went out as Christina (an obvious choice since my male self was ‘Chris’), I felt like myself and that I belonged in the female culture and community. So, I sort of grew into being Christina over time.

TELL US ABOUT YOUR DECISION TO BEGIN YOUR TRANSITION.

By my late twenties, I knew that I wanted to become a woman, and started seeing a doctor for a diagnosis of gender dysphoria, so that I could start receiving hormone therapy. At work, I was still hiding who I was and as a result I became quite ill with panic attacks — to the point that I thought I was going to die. I had panic attacks every single day for about 10 years. My heart would absolutely race like mad; it would race in the morning, on the way to work, and in the middle of the night. I became quite a hypochondriac and was constantly waiting for a panic attack to happen. Panic feeds panic, so it becomes a vicious cycle. The anxiety stemmed from the secrecy around having to hide my identity and I became really, really ill. I had the choice of either living or thinking I was going to die. That’s why I had to come out.

WHAT WAS YOUR EXPERIENCE OF COMING OUT IN YOUR PROFESSIONAL LIFE?

For a few years, I was searching for a way to do it. I mean, how do you come out in a male dominated industry? By 2014, I was at Balfour Beatty. One day in reception I saw an advert for the launch of an LGBT network. It sounds ridiculous now, but back then I’d never heard of LGBT networks. I took the day off, and went along. There were about 30 people there, and I remember listening to the chairperson launch the network, and it was during that speech that I made up my mind I was going to come out. I hung around afterwards looking for someone to speak to and it ended up being Balfour Beatty’s HR director. She was the very first person I came out to at work, which was a liberating moment. Talking to her, I felt safe for the first time in my 22 years of working in construction. We set up a plan that would see me come out to my colleagues within six months. We put in fortnightly meetings to plan it. Nobody had ever done this before at Balfour Beatty; even though it was the largest construction company in the UK — there was no precedent.

WHAT HAS BEEN THE MOST CHALLENGING PART OF COMING OUT?

Balfour Beatty did a really good job of supporting me; the coming out part of it was really well managed. I think the difficulty came later on at smaller companies, and in living my life as a woman, starting to notice the macroaggressions. Often the problems came from middle management rather than senior leadership. For example, I was often welcomed to the table by senior leaders, who recognised I could support them around their thinking in terms of diversity and inclusion. But direct managers often didn’t ‘get’ the trans thing and I think I was overlooked because of it when it came to promotions, for example.

HOW HAVE YOUR EXPERIENCES SHAPED YOUR CONFIDENCE?

I do quite a lot of public speaking — I chair the London Build Expo Diversity stage at Olympia which has thousands of people turn up, and often I’ll sit there feeling like I don’t deserve to be there or that I’m not good enough. But then I do it and it is always amazing and I get a lot of support. Five years ago, I wouldn’t have believed that I’d be hosting a stage at a famous venue in front of thousands of people. In coming out and transitioning, I’ve conquered probably the hardest thing mentally that I could ever do, so anything I do now doesn’t compare. I do get a little bit of stage nerves, but once I get going I find I can relax and it doesn’t really faze me anymore. I suppose the tip in terms of confidence is: try to challenge yourself, to put yourself out of your comfort zone, because once you do it once, you can try something a little harder next time.

HOW WOULD YOU SUM UP THE STATE OF THE CONSTRUCTION INDUSTRY TODAY IN RELATION TO THE MACHO CULTURE YOU EXPERIENCED EARLIER IN YOUR CAREER?

There is definitely a drive for change. Women are definitely grabbing hold of the agenda, and you see it with so many more events and networks that are cropping up. We do need to see more follow through and year-round action from those alpha male allies that stand up and talk on International Women’s Day. At the end of the day, our industry still has one of the worst gender pay gaps. We’re not getting a high intake of women into the industry to then follow up into senior positions, so the pay gap is a tricky one to fix. The culture is improving, but we need to see that happening right across the industry — not just in the top 30 companies. Every construction business, large or small, needs to be looking at its culture in regards to gender inclusion.

WHY IS BEING AN LGBT ADVOCATE SO IMPORTANT TO YOU?

I want to show people that transitioning isn’t a bad thing. You can be who you want to be, succeed, and be accepted. For a lot of people, there’s still a stigma attached to being LGBT. I want to be a role model to anyone who is transitioning and show them that if you go out of your comfort zone, you can achieve anything. That is one of the biggest things that has driven me.

Ask the everywoman Experts….how can I take on a leadership role and not lose my work-life balance?

Female leaders as futurologists and changemakers: Our role in identifying challenges and opportunities along the talent pipeline

SIGN UP
PrevPrevious7 practical ways to become a better male ally
NextASK THE EVERYWOMAN EXPERTS: I OVERSHARED AT WORK AND NOW IT’S AFFECTING MY MENTAL HEALTHNext
We use cookies on our website to give you the most relevant experience by remembering your preferences and repeat visits. By clicking “Accept All”, you consent to the use of ALL the cookies. However, you may visit "Cookie Settings" to provide a controlled consent.
Cookie SettingsAccept All
Manage consent