everywoman Incognito: ‘I combine a career with caring for someone with dementia’ 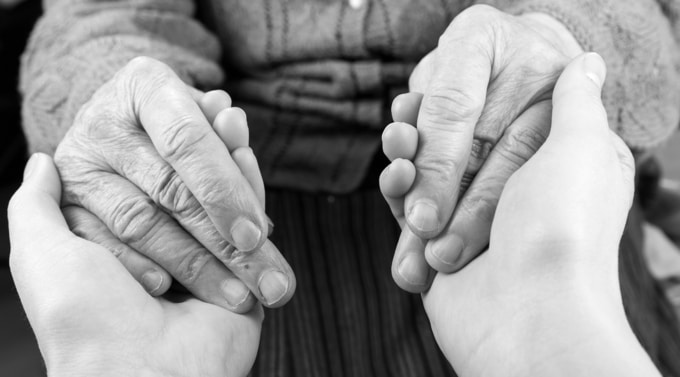 Nine years ago, my mother-in-law Barbara* moved in with us. I was a marketing director in a highly pressured industry, working on multi-million-pound projects with global reach. My typical week was one of long days in an office combined with frequent European travel.

The journey to being a working carer had begun two years earlier, when Barbara’s daughter started noticing out-of-character things like a lack of food in the fridge and an untidy house. Then we began to get phone calls from neighbours, who’d find Barbara on the pavement, unable to get up. Looking back, I think she was having little strokes that heralded vascular dementia.

It was challenging for my husband and his sister to initiate conversations with their mother about moving her into a care home or in with one of them. Barbara was reluctant, but she became increasingly vulnerable, and, two years later, she came around to the fact that it was necessary.

We had the larger house, so Barbara decided she would move in with us. I’m my husband’s second wife, so I didn’t really know her very well at the time, but it didn’t cross my mind for a minute that we wouldn’t look after one of our own. We built a studio flat for Barbara on the side of our house; my husband was freelancing at the time and, in the beginning, he did the majority of the care —sorting out her finances, doctors’ appointments and her dementia diagnosis. But gradually, as care become more intimate, I took on more responsibility. At the same time, I was Mum to a seven-year-old boy and two stepdaughters. It wasn’t long before I felt stretched — and often to the limit.

I think you have to experience the caring life to really understand it. Earlier in my career, I remember a lady with a son who worked for me negotiating a slightly shorter working week. Afterwards someone said to me, ‘I’m not sure about Laura’s* commitment’. It sounded perfectly reasonable to me that she should take time out in the week to organise dentists’ appointments and such — but in the culture I was working in it was clear you had to ‘be there’ to demonstrate loyalty. I noticed that plenty of people were not really working much when they were in the office. And as I was to learn, carers actually demonstrate incredible commitment – because they value the job more highly and use their advanced organisational and creative skills to make it work.

One in eight working people are carers, so it’s more common than people think – but looking after parents can feel like one of the last work taboos. I rarely spoke to anyone about caring at work and chose to channel ‘superwoman’ instead; I’m a typical type-A personality; I always overachieve, so I saw caring for Barbara — from managing her banking and medication to doing her shopping and all the many other things that make someone’s life run — as just another thing I had to drive through. Being accountable 24–7 for someone else takes a lot of organisation. I am resilient, but it was incredibly stressful and there were times I had to just go off and have a good cry. Spontaneous trips away for the weekend disappeared.

Four years into caring, my company moved its headquarters and my 50-minute commute turned into an hour and a half. A progressive female CEO joined the company and instigated flexible working, enabling most employees to work when and where they preferred. That was great for the majority of the business, but senior managers were still expected to be in the office full-time. I had 50 people reporting to me, so my chances of working from home were slim, even though I was someone who could have really used that wiggle room. By now, I was getting up at 5am to be in the office at 7am, then getting home and putting in a ‘second shift’ caring for Barbara.

I also couldn’t now pop home in the day if I needed to and something had to give. A year later I left to go freelance — just as my husband went back into a full-time role. My new ‘calling’ was to pivot towards healthcare and caring, with a view to building my own business. I began consulting, and started a blog to help working carers sandwiched between kids and older parents. I hadn’t actually seen myself as a carer up to that point; for me, my mother-in-law just lived with us. I went to a carers’ group one day out of interest — and then the reality hit me.

Caring while freelancing does allow more flexibility, but it brings its own challenges. It requires discipline to ensure that the activity that earns revenue has enough attention. When you’re at home, it’s easy for your relative to lean on you more, and this, combined with other responsibilities like school runs, means your work time can contract — if you allow it.

My mother-in-law’s cognitive decline continued, and after a fall she went into hospital and came out weaker than when she went in. No one plans for a caring role, but with the perilous state of the care sector it makes sense to invest in the support of family carers, who keep loved ones out of hospitals and care homes. It costs our local authority a quarter of the price to support Barbara at home through the loan of mobility equipment.

And business can play a big role in supporting working carers. If companies truly care about ‘employee wellness’, they need to understand that it’s not just about flu jabs and occupational health. It’s also about asking employees what other roles they have, from parenting to caring, and how they can be supported to perform at their best. What I’ve learned over the years is that little bits of help add up to a lot, and if employers make it okay to talk about caring and prioritise adjustments, this makes a measurable difference to performance. Leaders, too, need to take personal ownership, especially those with caring experience, and allow themselves to be vulnerable to encourage fellow carers to come forward. With society’s ageing demographic, more and more workers will find themselves caring, so change is vital.

I’m now passing the majority of Barbara’s care back to my husband again. He is semi-retiring while I launch my business. And as a leader, I’ll fully accommodate flexible working — I’ve learned that we’ve all got ‘stuff’ going on at home, so while it’s my responsibility to agree clear expectations with individuals about what they’ll deliver, I can let people decide how to manage their work commitments around that.

Julia* told her story with the support of Carers UK, the national charity for people caring unpaid for family or friends who are older, disabled or seriously ill.

Carers UK estimates that half of women in the UK can expect to become an unpaid carer by the age of 46, compared to half of men, who can expect to care at 57. With loved ones living for longer, women, more than a decade earlier than men, are facing difficult decisions about their loved ones’ health, family finances and how best to combine paid work and care.

Carers UK wants to see carers given a right of five to ten days of paid carer’s leave, coupled with long-term investment in social care services so that women can better balance work and care if they wish to. Find out more about their Carer’s Leave campaign.

Does your employer offer support for carers in your workplace? Why not speak to them about becoming a member of Employers for Carers and putting in support to help people with caring responsibilities better balance their work and caring roles.

SIGN UP
PrevPreviousEliminating unconscious bias from your written communications
NextWinners announced at 2020 Amazon everywoman in Transport & Logistics AwardsNext
We use cookies on our website to give you the most relevant experience by remembering your preferences and repeat visits. By clicking “Accept All”, you consent to the use of ALL the cookies. However, you may visit "Cookie Settings" to provide a controlled consent.
Cookie SettingsAccept All
Manage consent