What I learned from my maternity leave 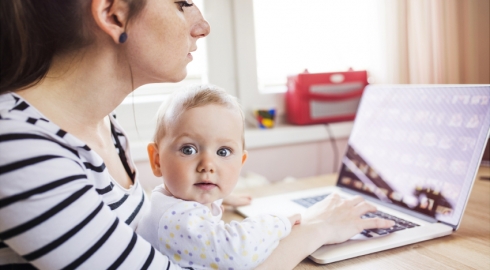 There’s no one-size-fits-all approach to maternity leave. On one end of the spectrum there are the women who are back in the coalface on day three post natal; on the other are women whose experience results in a drastic overhaul of work-life priorities.

In between there are women whose period of stay-at-home motherhood sparks a business idea which throws them a career curveball, and those for whom the challenges of life with baby mean there’s no headspace for anything else.  Whatever the experience, there’s always a lesson. We round up what successful businesswomen have taken from theirs.

But in her book, Strong Woman and in subsequent interviews she speaks about the need to let go of guilt around being a working mother – whether that’s being with the children when work calls, or being at work and leaving the children in the care of another: “Feelings of guilt can creep in. My children and my work are the two most important things in my life. Finding that balance is very important. There are times when you have to make very difficult choices: weigh up the nativity play versus the board meeting. You won’t be at everything, but I always say that my children are healthy, intelligent, well mannered, bright, opinionated and well educated and that’s not because the nanny drove them to school in the morning. It’s because of the time that I’ve spent with them, the times that I’ve talked to them, nurtured them and shown them how to express opinions.”

She’s also a firm advocate of taking a moment to appreciate yourself and your role as working mother: “Being a housewife and being a mother is one of the most underappreciated yet most important jobs that you can do. Unlike at work, where there’s someone to pat you on the back, to give you a pay rise and to make you feel worthwhile, when you’re at home, there’s no one to do that.”

“Plan while they sleep!”

For some women, corporate hours make it almost impossible to turn a business idea into a thriving entrepreneurial reality. Which is why so many women are taking a ‘power maternity leave’ whereby the hours spent while baby is sleeping are devoted to laying the groundwork for a new future career – often a home business which, further down the track, will give the new mother a flexible schedule and an understanding boss – herself.

Dr Jennifer Gardner (Founder Healthy Kids Company), a paediatrician, used her maternity leave to bring to life an idea that had been kicking around for years – an organisation educating parents on the importance of nutrition in childhood: “Maternity leave was actually a great time to start working on it. I knew I was eventually going to return to full-time work as a paediatrician, but while my son was sleeping, I had the free hours necessary to build my website,” she says. “Starting a company to educate families had always been a passion of mine, but prior to maternity leave, I didn’t really have the time to devote to my idea.”

“When you’re a new mother, it feels like everyone wants a piece of you — literally, figuratively, and emotionally,” writes Hilary Pearl,Harvard Business School graduate and former Pepsi executive, in a Harvard Business Review blog. “Add physiological changes, a lack of sleep, and hormonal fluctuations into that mix and it’s easy to understand why returning to work after maternity leave can be one of the most fraught, challenging, and stressful times in a woman’s life.”

To combat the effect that emotions can wreak on you during leave and on returning to work, Hilary advocates using the time before the birth to read up on post partum emotions: “Be well informed about [what might happen] so you don’t feel that your reactions are abnormal or that there is something defective or inadequate about you.”

She also encourages building support groups of women with whom you can share your fears and feelings, and making sure that work-life balance isn’t just about baby time and professional time but also includes ‘me time’: “Find even small ways to build your executive stamina through fitness, meditation, nutrition, hydration, and getting as much sleep and sunlight as you can. Take breaks when possible at home and at work to restore your energy and recharge your batteries.”

“If you’ve had two bouts of maternity leave in four years then when it comes to your performance review, your ‘highlights’ might go back a while and you’re automatically at a disadvantage, says O2’s HR Director Ann Pickering, whose own sense of disconnection during maternity leave has shaped her policy-making for women raising families alongside their work for the telecoms giant.

SIGN UP
PrevPreviousQuiz: how assertive are you?
NextSuccessful meetings: it’s all in the preparation (part 1)Next
We use cookies on our website to give you the most relevant experience by remembering your preferences and repeat visits. By clicking “Accept All”, you consent to the use of ALL the cookies. However, you may visit "Cookie Settings" to provide a controlled consent.
Cookie SettingsAccept All
Manage consent