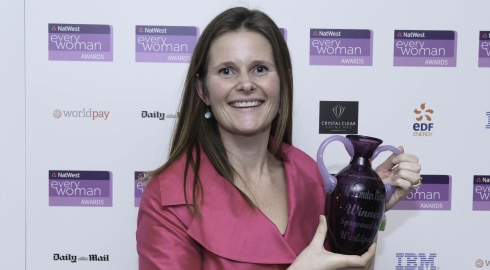 After a career specialising in 20th century British art at Sotheby’s, it’s little wonder that Poppy Mardall set out to introduce a creative dimension to her next career step. Armed with the belief that everyone has the right to an affordable funeral and that taking a meaningful approach can change lives for the better, she quit her high-flying career as a Deputy Director at the famous auction house to launch Poppy’s Funerals in 2012.

The freedom to do it your way

After noticing the lack of creativity offered to grieving families, Poppy sought first-hand insight from established funeral directors and spent time in their mortuaries. It was here that she realised there was a way to make the process more down-to-earth and people-centric.

Her concept? That a good funeral director should be like a good midwife, offering a personalised and supportive approach. So,  whether the family prefer a ceremony somewhere more meaningful than the crematorium or simply want a no-fuss funeral, her business gives people the freedom to do it their own way.

We’re trying to reimagine how this work should be done

Poppy’s family knew she loves a challenge and that, as a former Samaritan and Trinity Hospice volunteer, she has always tried to help people in difficult situations.  Yet, despite this, her friends, family and colleagues thought her decision to swap careers and breathe life into a traditionally sombre profession was completely far-fetched.

Three years later and Poppy feels her greatest achievement, aside from proving everyone wrong, was opening up a stunning mortuary in Tooting last November. “Funeral directors’ mortuaries can be incredibly depressing. They tend to be places where the public don’t come so, although what’s happening in there is very important, it can feel there is a real lack of care given to the mortuary. I always felt this was wrong and wanted Poppy’s Funerals mortuary to be an inspiring space.”

“Our mortuary is located in a nineteenth century chapel and gatehouse in Tooting, where light streams through the beautiful historic windows. It’s a really uplifting space to spend time in and we’re so proud to bring families behind the scenes. I guess we’re trying to reimagine how this work should be done and the mortuary was a huge step forward on that front.”

When asked what advice she’d give to someone looking to go it alone, Poppy said: “I speak to a lot of people who want to set up their own business but don’t feel they’ve had the ‘lightbulb’ moment yet. I’m not convinced the lightbulb moment happens very often; it certainly didn’t for me.”

Instead, she advises scheduling an hour of two every week to move concepts forward, potentially meeting up with someone who believes it’s a good step forward for you and bouncing ideas over a coffee.

“They need to know you well so they’ll be good at helping you think realistically about what you’d be good at and what you’d enjoy. It should be something you look forward to, a time where you can think completely freely and enjoy yourself.”

“Now there’s no limit to what we can do”

Behind Poppy’s calm and friendly exterior lies dogged determination and conviction in her decision to step outside her career comfort zone. And yet, being selected as a NatWest Award winner played a key role in reinforcing her future ambitions and boosting her self-belief.

“There have been huge opportunities which simply wouldn’t have come our way without the award, such as a double-page feature in Woman and Home magazine. But the best thing by far has been the confidence it has given me.

“I’ve always had big ambitions for Poppy’s Funerals but now I feel there’s no limit to what we can do. The recognition the NatWest everywoman Awards gives you completely amplifies your sense of what is possible.”

Across its six categories, the NatWest everywoman Awards celebrate the success of female business leaders at every stage of their inspiring journey, from start-ups to established multi-million pound organisations.

SIGN UP
PrevPreviousYour 1-2-1: 6 ways to get more out of meeting the boss
NextNetworking 101: Growing your contacts list (part two)Next
We use cookies on our website to give you the most relevant experience by remembering your preferences and repeat visits. By clicking “Accept All”, you consent to the use of ALL the cookies. However, you may visit "Cookie Settings" to provide a controlled consent.
Cookie SettingsAccept All
Manage consent