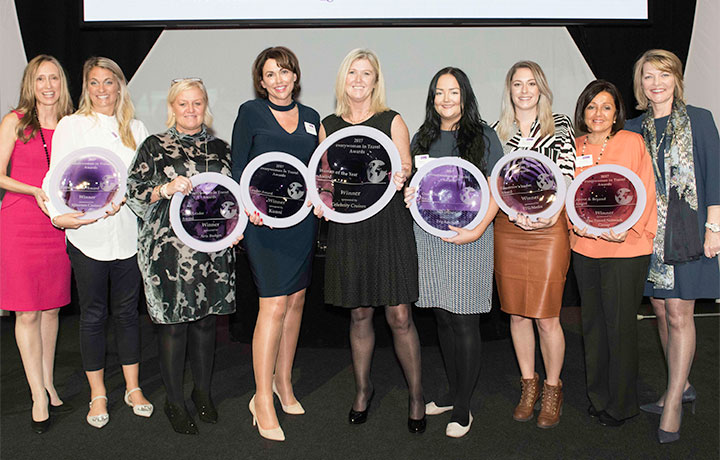 The finalists in the 2018 IBM iX everywoman in Travel Awards have been announced today. From young apprentices starting their career journey, to well-established entrepreneurs inspiring other ambitious individuals to join the industry, the 29 finalists are the role models whose success stories will encourage the next generation of travel stars.

For over 20 years, both everywoman and IBM iX have remained dedicated to the diversity agenda of advancing female talent. This year, they have joined forces by introducing IBM iX as a Title Partner to celebrate the travel industry’s brightest individuals excelling at all stages of their career. The awards programme will support their mission to showcase the range of opportunities in this ever-evolving sector.

The travel industry plays a huge role in the UK economy, contributing over £130 billion to its growth.* However, in light of Brexit and growing uncertainty over what this will mean for freedom of movement, many of the EU workers who make up 24% of the UK’s travel workforce, are choosing to relocate.** With a smaller pool of talent to recruit from, attracting a gender-balanced workforce with a range of skills, along with engaging and retaining the very best, has never been more crucial to future proofing the travel sector in the UK. This is why the 2018 IBM iX everywoman in Travel Awards programme is so important.

This year’s finalists were hand-selected by the industry’s most discerning leaders including Chris Browne OBE, COO at easyJet; Jackie Wybrow, Senior Director, People Operations, TripAdvisor; and Jo Rzymowska, Vice President & Managing Director at Celebrity Cruises. With new categories introduced for 2018, the awards will celebrate a wider range of talent including the Male Agents of Change advancing the progress of women, and the International Inspirations who are role models for women around the world – from Stockholm, to Brussels, to New Delhi.

Winners will be announced at a ceremony held at East Wintergarden, located between the iconic towers of Canary Wharf in London on 14 November. Aside from category winners, an extraordinary Woman of the Year, whose success makes her an exceptional role model and industry ambassador, will also be announced.

The 2018 IBM iX everywoman in Travel Awards category finalists are as follows:

One to Watch, sponsored by Tripadvisor – Awarded to a young game-changer under the age of 21 in education or apprenticeship who demonstrates a passion for the travel industry.

Tomorrow’s Leader, sponsored by TTG Media – Awarded to a woman under 30 making a significant contribution to the sector.

Entrepreneur, sponsored by Celebrity Cruises – Awarded to an owner/operator of a travel business that has been operating for three years or more whose vision will inspire other women to start their own enterprise.

Above & Beyond, sponsored by Avis Budget Group – Awarded to a woman at any stage of her career that has truly gone above and beyond her role to help drive the organisation’s success.

Team Leader, sponsored by EasyJet – Awarded to a woman whose team leadership has greatly contributed to the organisation’s success.

*New for 2018* Leader of Change, sponsored by Hilton – Awarded to a woman who is making a significant contribution towards the strategic direction of the business through best practices, employee engagement, improved productivity and innovation.

*New for 2018* International Inspiration, sponsored by Gold Medal & Travel 2 – Awarded to a woman working outside the UK & Ireland that is a role model for women in her community.

*New for 2018* Male Agent of Change, sponsored by Heathrow – Awarded to a man for his active commitment to advancing the progress of women working in travel.

*New for 2018 * Executive Leader, sponsored by Radisson Hotel Group – Awarded to a woman making a significant direct financial contribution to the commercial success of the business.

Karen Gill MBE, Co-Founder of everywoman, comments: “This year, we are revealing a wider range of talent in the travel industry than ever before – from the men dedicated to creating a gender-balanced workplace, to the women making a difference outside the UK. With the invaluable support of IBM iX, everywoman is now going to greater lengths to ensure a future-proof pipeline of talent in the sector. We look forward to celebrating all winners and finalists in November, who will go on to be the long-term role models and ambassadors the industry needs.”

Daniel Pearce, Managing Director, TTG Media, comments : TTG Media has worked hard to champion diversity in travel in recent years, and to help all travel professionals achieve their potential and goals. As such, we are delighted to be working with everywoman on its everywoman in Travel Awards again in 2018 and have been excited to see the initiative capture the attention of the industry. We look forward to helping to raise the profile of this year’s worthy winners, so that they might inspire and encourage other women both inside and outside the travel industry.

Debbie Vavangas, UKI Lead of Digital Strategy and iX for IBM added: “Over the past two decades, developments in technology have played a fundamental role in the growth of the travel industry. Life is all about experiences and digital technology has changed the customer experience and the way in which we connect. Companies need to get smarter and adapt continuously as consumer expectations rise. In light of this, we need to recognise the outstanding achievements of those who work within this ever-changing industry. We wish everyone the best of luck.”

SIGN UP
PrevPreviousSophie Chandauka on mentoring and global leadership
NextSix great blogs to improve your public speakingNext
We use cookies on our website to give you the most relevant experience by remembering your preferences and repeat visits. By clicking “Accept All”, you consent to the use of ALL the cookies. However, you may visit "Cookie Settings" to provide a controlled consent.
Cookie SettingsAccept All
Manage consent