13 Questions We Ask Everyone: Stephanie Davies, CEO of Laughology 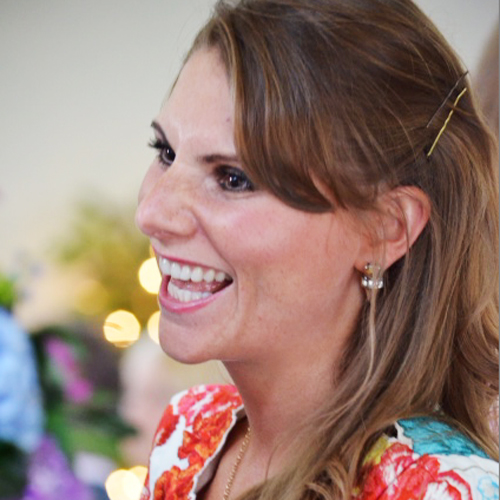 Stephanie has a background in stand-up comedy and is one of the UK’s leading voices on creating happiness in the workplace. In 2006, she founded Laughology, a learning and development consultancy that delivers programmes underpinned by the neuroscience of humour, laughter and happiness.

My garden. I have a home office but during lockdown my husband and I are taking turns in it, so I’m consigned to the kitchen today and enjoying the view of the garden. I’m on the road so much normally that I’m actually enjoying this period; it’s nice to be in one place.

Head of Googling Everything! Like most directors, executives, and entrepreneurs, I say “yes” to a lot of things and then go “Argh! I don’t know how to do that!”, so there’s a lot of time spent searching for information. I call myself ‘Head of Happiness’ as well. I’m dyslexic and when I was younger the only thing I could really do well was make people smile.

It’s probably my dyslexia. I wasn’t diagnosed until I was about 18 so up until that point I just assumed I didn’t have the skills everyone else had. I was bottom of the class and was suspended and expelled because I messed about just to get out of reading and writing. I thought I was thick. Later in life I was able to do a Master’s and study neuroscience because my dyslexia means my brain works by taking complex ideas and simplifying them. For example, one of the psychological terms for when people have imbalanced thought processes is ‘common cognitive errors’. To me that’s impenetrable jargon, so at Laughology we call it ‘wonky thinking’, and everyone gets that.

Wanting to do too much, too soon. Probably like every entrepreneur I have lots of ideas and tend to race ahead without thinking the details through. My thought process is always ‘It’ll just work’, I don’t always consider the ‘how’. I’m very conscious I have to work on that.

Because of the coronavirus situation, all our bookings are going virtual. Our system is usually automated but we’re having to update everything manually, which is no fun!

Everyone would say I’m an extravert. As a performer, I feed off audiences and I’ve really missed that in lockdown. My husband and I stopped to speak to friends on the street (while socially distancing, of course) and I was my usual bubbly self. Afterwards he turned to me and joked: “Why do you always have to perform and take centre stage?” But interestingly, I’ve also found in this period that I really need time to myself too. On Zoom, I have to work much harder to generate humour and bring things to life, which can be tiring. In normal life, I’m always travelling and after performances I have nights alone in hotel rooms — that downtime is really important.

My old school teacher, Mrs Harmer. She saw through the bad behaviour and introduced me to an acting and scripting workshop. I hadn’t known I wanted to perform, but she saw something in me and I realised it was something I could be good at. When my book, Laughology: Improve Your Life With The Science Of Laughter, was published, I tracked her down and told her that she was the reason this book existed. She said it was one of the nicest emails she’d ever received and I’m so glad I got to thank her. Her belief in me meant everything.

Always Look On The Bright Side Of life. The Morecombe and Wise version.

Patch Adams [the American physician, comedian and clown]. I’ve worked with him and he’s such a character; he throws in questions that would get people going in a good way. If I can bring people back from the dead, then Judy Garland. Oh and Stephen Hawking. I’ve only ever got past page three of A Brief History Of Time, so perhaps he could explain it.

Early bird — I’m always up around 5.30am. And I’m one of those annoying people who are really perky with it too!

Performing to around 1,500 people at a London conference centre. I’m happiest in front of an audience. We do charity stand-up events too, where we train people to deliver routines and seeing people who’ve never done comedy before get up and perform is just incredible.

Working on a big project about innovation, I had to read a lot of papers to get my head around all the theory. The project team was full of super-clever experts and when I walked into that room I felt I wasn’t on par. In situations like that I have to remind myself that my role is to help them think differently, and that’s where my dyslexia really is a big advantage.

I toyed with the idea of being a vet. But I don’t like spiders and the thought of sticking my hand up something’s bottom doesn’t appeal, not during work hours…

SIGN UP
PrevPrevious6 Ways to get the best from a virtual team
NextRoni Savage: a female in a male-dominated industryNext
We use cookies on our website to give you the most relevant experience by remembering your preferences and repeat visits. By clicking “Accept All”, you consent to the use of ALL the cookies. However, you may visit "Cookie Settings" to provide a controlled consent.
Cookie SettingsAccept All
Manage consent